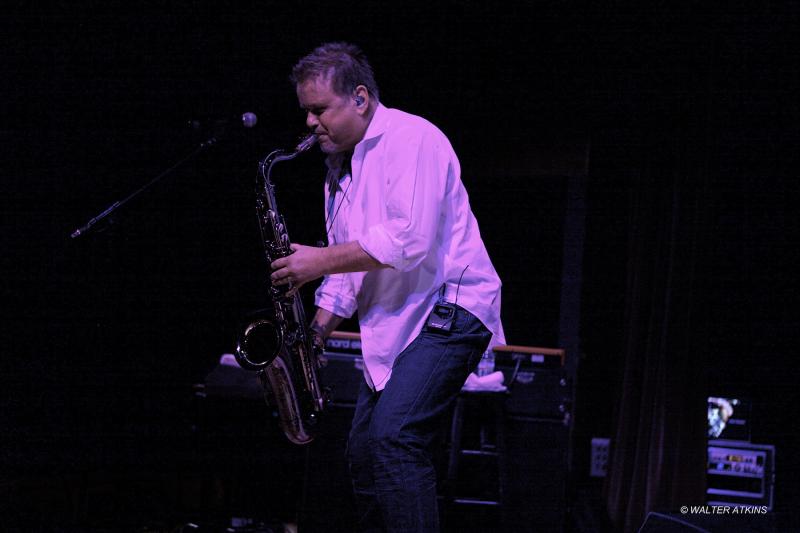 By WALTER ATKINS
February 14, 2016
Sign in to view read count

He one handed his saxophone and played a riff from Toto’s 1978 track “Georgy,” while gleefully motioning for more applause with his free hand. —Walter Atkins

The smooth jazz stalwart opened the nightcap set with the energetic "House Of Groove" followed by "Faithful Central." EG asked the audience, "Do you believe in the funk?" After a hearty response, he told his killer band to, "Hit me one time, two times..." then went into his soulful James Brown inspired "Got 2 Be Groovin," also the title tune of his 2014 Shanatchie release. He told his supporters to "make some noise" because they seemed a little too laid-back. The saxophonist pranced and played with near limitless vivacity during the evening. He said "It's time for giving love Yoshi's-give large" then jumped into "Living Large." He one handed his saxophone and played a riff from Toto's 1978 track "Georgy," while gleefully motioning for more applause with his free hand. The attendees quickly responded accordingly. He talked about his successful career in smooth jazz and how he loved performing.

EG played tracks from his older albums including Sneak A Peek which featured some searing guitar work from Jacobs. He talked about the hard work that goes into making an album and promoting it. After mentioning the 125,000 air miles he traveled, he noticed there was little sympathy from the room. EG had 10 solo albums and was still huge. He added his therapist said to "release his inner child" while inhaling an imaginary joint. EG calmly said not to worry, he had a card and all was legal.

A happily married man, EG talked about strong family support from his wife Bane who often came to the studio. He turned his emotions into song and wrote "Miss Bane" for her. He performed the beautiful testimonial on the front end of the "Miss Bane/Chillaxing" medley. The popular saxophonist added, "I love my wife."

He implored, "Raise your hands like this," as the crowd's hands went up. "Feel it, keep it going," he said. EG stated he was excited about Super Bowl 50 and excited about being here in Oakland. One of the club guests was wearing a Carolina Panthers ball cap. The friendly Scottio Oswalt was the entertainment manager for the Nashville restaurant chain Sambuca. With an affable grin, he proudly proclaimed his was "the best" and the other restaurants were "just science projects." We had a good laugh.

"If you want to strike up some romance, nothing is better than some Motown," according to EG. His cover of the Temptations' melodic "Just My Imagination" filled the bill. He went into the crowd and picked out an older couple while Clausen accompanied him on the keyboards. Ladies in the audience screamed as he made a husband get down on one knee to his wife while playing. Encouraging the customers, EG said, "first just the ladies then the fellas." He asked the guys to sing Marvin Gaye's "Let's Get It On" and "turn to your lady." EG said when his phone was ringing from his wife, he would drop everything. His advice while watching the game was, "drop the nachos and run upstairs!" Later he said, "Even if you don't believe in God, shit happens." He started playing, "Rain On Me." The composition featured a long somber piano solo. EG asked the question "How do you go from this to something special? No matter, ask God to rain down on you."

EG casually mentioned he "stole" his talented drummer from Brian Culbertson. Claiming he wanted to go old school with next song but didn't want to call it "old school," he entitled it "old.edu." He said techies would recognize the name. Couples dance in the aisles to the funky song while Mims stretched out on bass. They added some of Bobby Womack's definitive soul classic "Woman's Gotta Have It." With a smile, he added," You guys old-school up really well."

He wanted to make the closing "Born 2 Groove" a dance contest, but "not a Miley-Cyrus-skinny-butt- twerking" kind of dance contest. Some motivated fans danced in the aisles and around the stage to the feisty beat. The band segued into music saluting the East Bay's long running Tower Of Power, referencing the TOP hit "What Is Hip." Miskel's strong drumming powered the rocking moment. EG had played with the enduring horn based band and mentioned "Hip" and 1974's "East Bay Grease." He then asked if "all God's children can feel it."

He introduced his howling band one again before they all exited the stage to an uproariously extended ovation.The standing ovation continued for several minutes before they returned to play some more for the appreciative listeners. He indicated he was feeling all right and had been outside with his "inner child."

At least for tonight, Euge Groove proved he was the hardest working man in smooth jazz during this enjoyable show. Supported by an effective and fervent band, the impassioned instrumentalist brought the venue to its collective feet for an ample set of funky and soulful music.