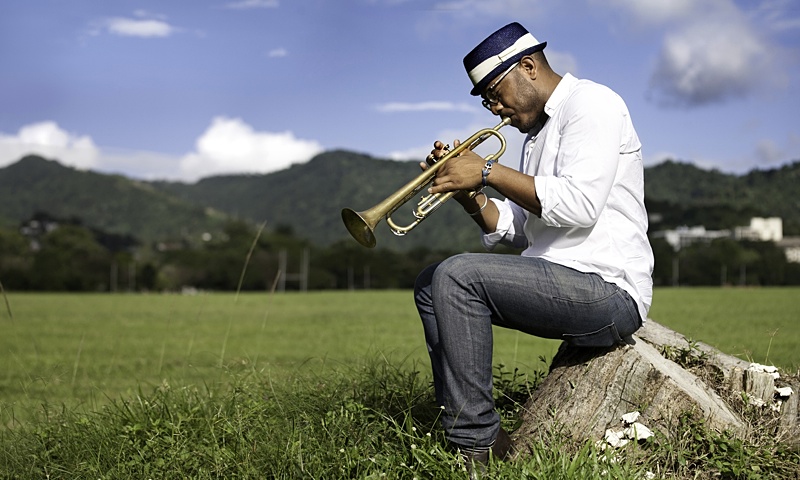 By DANMICHAEL REYES
July 29, 2013
Sign in to view read count
Trinidadian-born trumpeter Etienne Charles has made it a point to share the culture of his native homeland with the world through music, whether it is writing songs on cuatro or steel pan, incorporating Kweyol chants on the opening track to his latest album Creole Soul (Culture Shock, 2013), or playing with an undeniable Caribbean bounce that caused the audience of Dizzy's Club Coca Cola to form a conga line through the venue during his album release show for Kaiso (Culture Shock, 2011). Since his debut, Culture Shock (Self Produced, 2006), Charles has been showing audiences that he is able to seamlessly fuse straight-ahead and Caribbean music to create an innovative sound that is deeply rooted in the tradition.

Etienne Charles comes from a strong lineage of musicians that can be traced to his great grandfather, who played banjo and violin. His grandfather, Ralph Charles, was a cuatro player who recorded with the calypsonian Growling Tiger. Both his father and uncle were members of the steel orchestra Phase II Pan Groove, which won national Panorama competitions back-to-back in 1987 and '88. By the time he was 10, the young Charles would also join Phase II.

As a sideman, Charles has recorded or performed alongside Monty Alexander, Wynton Marsalis, Marcus Roberts, Roberta Flack, Maria Schneider, The Count Basie Orchestra, and the legendary calypsonian Lord Blakie, for whom he played drums. "At the time, I knew [Lord Blakie] was a legend and he had big hits," recalls Charles. "But I know [more] about Calypso now, so I wish I could have played with him now, but he's no longer with us. I wish I had asked him questions. I didn't really get a chance to interact with him other than at the rehearsal."

Another luminary musical figure that helped Charles come up as a musician was the late percussionist Ralph McDonald, who he honors with a song made famous by The Mighty Sparrow, "Memories."

"He was a special spirit and I'm very lucky to [have] been around him as much as I was in the last five or six years of his life," remembers Charles. "He showed me so much about playing music and he brought me to his house. Every time there was a family get-together he would invite me over and there was always food. He was that mentor that shows you how life is supposed to be outside of music and how music is supposed to be a part of your life. He definitely helped me a lot. He was on all my previous records [except] this one because he passed away before we recorded. The session for me was uniquely emotional because you knew something had come to an end. But out of it, something had come of age."

While the Great American Songbook has been a huge staple for the idiom, it is also not uncommon for musicians to include songs outside of the genre. But Charles has the unique challenge of having a repertoire that does not have its roots in the United States. The Robert Glasper Experiment has interpreted tunes by J Dilla, The Bad Plus has covered Blondie, Brad Mehldau has played songs from Radiohead, and collectively all three acts have performed and recorded songs by Nirvana. The task is different and seemingly harder when the jazz artist is playing tunes from calypsonians like Lord Pretender, Lord Blakie, Lord Melody, The Duke of Iron, and The Mighty Sparrow. Although these great calypso artists are revered as legends in the Caribbean, they do not enjoy the same status in the United States. "It's one of the challenges of being a jazz musician whose standard repertoire is not just the American Songbook," Charles reveals. "You tell somebody you're about to play a song by George Gershwin, or a song by Harold Arlen, and the [audience] immediately knows. But when I say I'm about to play a song by the Duke of Iron or Lord Kitchener, people are just like 'Huh?'"

But not all music with from the Caribbean islands is lost to the public. "I've been pleasantly surprised that a lot of people know Lord Kitchener's music," Charles continues. "They know Mighty Sparrow's music, and they know Lord Melody's music because of his association with Harry Belafonte. So it's been a blessing—I mean everyone knows Bob Marley's music. Even on other planets, people are familiar with Bob Marley's music."

"We just play and that's our job as musicians, to advocate for these composers that have passed away and keep their music alive," continues Charles. "Be it Duke Ellington or be it Lord Kitchener. I think that the fact the music [sounds] beautiful is what will help us to keep going. Even though people may not be familiar with the composer, eventually they will be back in there with them."

With Creole Soul, Charles advocates composers from Bob Marley, Thelonious Monk, Winsford Devine, and Bo Diddley while penning six of his own compositions. It features the Marley classic "Turn Your Lights Down Low," a song that Charles has long been a part of Charles' repertoire, and Monk's "Green Chimney." Perhaps a song that best captures the mood of the Creole Soul is the Bo Diddley tune "You Don't Love Me," a song played as a blues by artists like Willie Cobbs and Junior Wells, as a rocksteady for reggae artist Dawn Penn, and now a jazz tune by Charles. Dawn Penn's version can still be heard on movies and TV commercials, and has been sampled by artists from Lilly Allen, Wu Tang Clan's Ghostface Killah, Beyonce and Rhianna. It is a song that was originally written as a blues that has enjoyed life in other genres giving it a sort of creole soul.

For songs like "Turn Your Lights Down Low," "Green Chimneys," "You Don't Love Me" and "Memories," Charles says that he wanted to "accentuate the idea of mixed cultures."

"The music is about being of a mixed culture or mixed heritage," Charles reveals. "It's about the many many things that make us who we are."

One facet that makes Charles who he is and defines his music is dancing. Music and dance always go together. There are still a few who remember when swing was also considered a dance and not just the sound of Elvin Jones' drum set. Even within classical western music, the idea of dancing to music is prevalent. Gigues don't just serve as Baroque classical pieces that conservatory students have to learn for juries, they are the 17th century equivalent of today's Harlem Shake. "I grew up— every time I heard music, there was dancing involved, every single time," recalls Charles. "My sister's a dancer, [so] every time I went to her dancer concerts there were always African drummers playing, or there were always music playing and they would dance to the music. So I was accustomed to seeing movement with sound—they always go together. Funnily enough, my favorite gigs are the ones where we're playing with the specific purpose of people dancing. I believe it's more challenging to keep people on the dance floor than [keeping] them interested in a concert hall."

"I always encourage people if they feel like dancing to get up and dance. I'm not one of those people who [will] get offended if you decide to shout and make some noise. I'm always encouraging them; to me, the most fun I have is when people actually get up and dance. Because it's an exchange of energy, we're playing and they're dancing, and we're going back and forth."

"But it's a challenge, and specifically our goal is to make people tap their toes, bounce their heads, and snap their fingers, shake their butts, and get up and move. That's our purpose, that's what we come out to do. Be it swing, calypso, reggae, funk, everything we play we try to make as deep in the groove as possible so that people feel the urge to get up and bounce. The bounce to me is everything in music. For me, it's about dancing—especially Caribbean music, it's about making that booty shake."

Charles' rendition of Thelonious Monk's "Green Chimneys" is one example of the bounce he commands. A bounce that is closely related to what Jelly Roll Morton calls "The Spanish Tinge."

"With 'Green Chimneys' it's almost like a habanera type rhythm, which is common sense based on where Monk grew up in San Juan Hill," comments Charles. "He must have [heard] calypso music. Caribbean music and New Orleans is all about beat four, [so] I connected the bass line and the melody on beat four to help accentuate that. A lot of people play 'Green Chimneys' as a second line beat. But we did it with a calypso beat instead of second line." 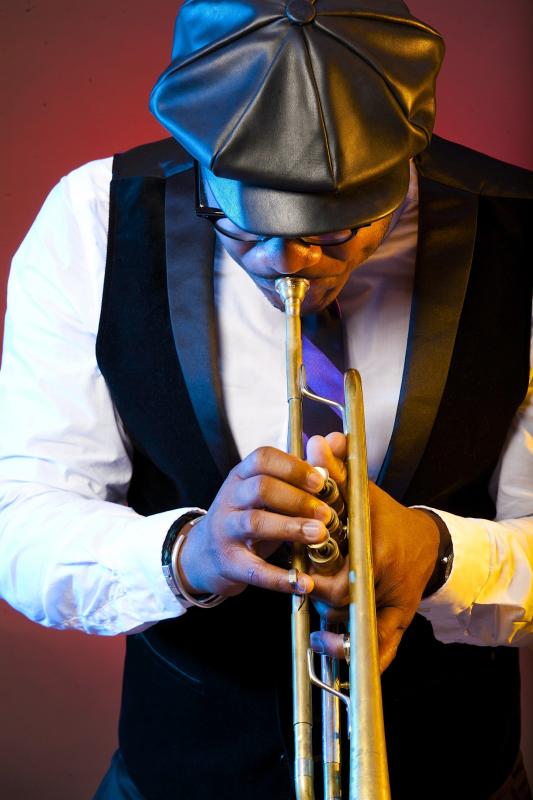 "If you're talking about Count Basie's music, that's dance music. A lot of Duke Ellington's records—that's based on dance rhythms. You talk about calypso, funk and R&B that's all dance rhythms. So I'll put on 'September' and I'll make them two-step so they learn how to two-step to Earth, Wind & Fire. Then I'll keep that same tempo and put on a Count Basie [record] so they're two stepping to Basie, then it connects to them that it's the same two-beat vibe. Then I'll take something from The Meters like 'Hey Pocky A-Way' and make them two- step to that, take some calypso and make them two-step to that. I sit them back down and we play the tune and it grooves like 28 times better. It immediately connects to the body and the brain, you immediately know where to syncopate and where the bounce [is]. It's probably one of my most helpful tools as a teacher."