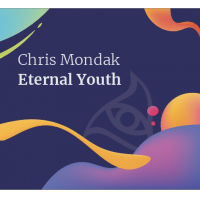 New England Conservatory of Music student Chris Mondak's Eternal Youth harkens back to early and hard-bop eras. Mondak, who has studied with Dave Holland and Cecil McBee, composed all of the songs (with the sole exception of "Be Honest with Yourself," which was co-written with his grandfather, Art Mondak). The music has a West Coast—Pacific Jazz feel. Mondak includes ballads on this offering and adds the invigorating Charlie Parker-like "Du Wow," which sounds like it could have been staged at the Royal Roost.

Whether walking the bass or providing counterpoint, Mondak keeps thing moving. His opening on the bubbling "Voyage Mist" consists of upbeat plucks and slaps while band mate Solomon Alber offers a throaty solo that soars upward atop the music like a great bird above some distant savanna. "Sweet Lovin" features Haoran Li's boisterous trombone. Matt Kelly gives the slow bluesy ballad "Abuelito" some fat sounding trumpet work. Guitarist Carlos Heredia whips up a graceful solo on the wishful "Dream Catcher" and, with their solos, saxophonist Alber and Li capture the upbeat mode of "Warriorld." The entire group gets a chance to shine on "Du Wow." The song even pauses for drum breaks, and Gavin Connolly fills the space with solos in a "make way for Max Roach" kind of way while Mondak adds to the romp with a Mingus-style walk.

For those who appreciate a retro approach to jazz and happy compositions, Mondak's Eternal Youth will most certainly satisfy.