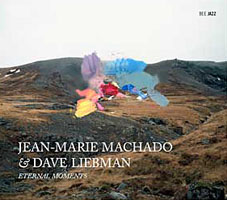 As Dave Liebman approaches the beginning of 2011, and his Jazz Masters Award from the National Endowment for the Arts (NEA), his discography continues to grow in unexpected and rapid leaps and bounds, with each release further affirming his stylistic and contextual breadth. He's collaborated with French pianist Jean-Marie Machado since 2003, largely in the intimate context of the duo, though there have been rumblings about a collaboration with a symphony orchestra. Eternal Moments is the pair's second release, following 2008's Caminando (on the Austrian PAO label), but is the first to receive wider international distribution thanks to the French Bee Jazz label. It's also, perhaps, a closer reflection of where the duo is now, released a little more than a year after its May, 2009 recording date, as opposed to Caminando, which took four years to see the light of day.

Liebman's reputation as a wildly expressionistic performer is intact on brighter, more assertive tracks like a surprising adaptation of classical composer Maurice Ravel's "Le Reveil de la Mariee," a modal workout whose arrangement could easily be imagined in the context of one of Liebman's heroes, John Coltrane—though, as always, Liebman's avoidance of pure sheets of sound for more inherent (albeit raw and unfettered) melodism creates a distance that's always been a part of Liebman's more expansive musical palette. It's also an album high point for Machado, whose combination of blocky left-hand chords and deft right-hand explorations suggest that, though he may be channeling McCoy Tyner to some extent, it's always through a personal filter which, like Liebman's, is more inherently thematic in focus, even when approaching those great extremes.

A combination of classicism and the engineering work of Studio La Buissonne's Gérard de Haro—who has participated on recent ECM recordings like Tomasz Stanko's Lontanoand Nik Bärtsch's Stoa (2006)—brings similar pristine clarity and transparency to this recording, in particular on Machado's dark-hued closer, "Moment Calme," where both players' economies and attention to tone, decay and silence are especially compelling.

That Liebman's name holds greater cachet shouldn't suggest an imbalance of power. Eternal Moments, is clearly a collective, democratic affair, and one which deserves to push Machado's name towards greater visibility as much as it affirms Liebman's reputation as one of the true greats of his generation.