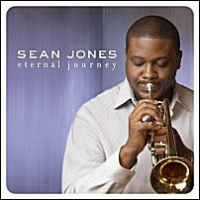 Sean Jones is the new horn in town. The 25-year-old trumpeter makes his debut as a leader on Eternal Journey, and he's obviously already well on his way to becoming an important voice on his instrument. For his first album he has surrounded himself with a group of highly skilled compatible musicians who complement and inspire his prodigious playing, beginning with saxophonist Tia Fuller, another exceedingly talented newcomer. With Mulgrew Miller and Orrin Evans sharing the piano chair and Charles Fambrough and Ralph Peterson driving the band on bass and drums, the trumpeter shows that he can handle himself in the most demanding of situations.

The group opens with Fuller's "Gullyism," an ardent anthem in the Jazz Messengers mode on which Jones demonstrates his fluency in the Lee Morgan/Freddie Hubbard trumpet tradition. The title track, another Fuller composition, features the composer's flute and reveals the leader's introspective side and sensitivity. Jones' "John" is a pensive piece memorializing his father, while his composition "The Serpent" is a highly rhythmic narrative piece, driven by Peterson's persistent drums, that dramatically depicts a snake pursuing its prey. "You're My Everything" and "God Bless The Child" (both with Miller, the latter a duet) are the first of several standards on which the young trumpeter exhibits his mastery of the art of ballad playing, a skill seldom found in one of his years.

"At The Last Minute," a powerful piece inspired by Peterson's "The Art of War," is a Jones tune on which both he and Fuller stretch out into freer forms. "Searching" is another appealing original from the leader, featuring his fleet trumpet and Fuller's soprano over a Latinish rhythm. Jones' reflective arrangement of "Somewhere Over The Rainbow" illustrates his uncommon maturity and musical insightfulness on an all-too-familiar standard. "I-95" is a relaxed, soulful outing by Jones featuring his muted trumpet played over Peterson's funky backbeat. The date ends with "The Very Thought Of You," another notable duet featuring Miller, rounding out an impressively wide-ranging first date that shows Sean Jones is a musician from whom listeners can expect many great things.