By GLENN ASTARITA
June 6, 2007
Sign in to view read count 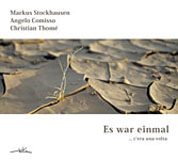 German trumpeter and composer Markus Stockhausen doesn't rest on his famous father and classical composer Karlheinz Stockhausen's laurels. With a hearty discography for this record label amid stints for ECM Records, ENJA and other well-known Germany-based outlets, the trumpeter has crafted a stylistic persona within the progressive jazz idiom.

On Es war einmal Stockhausen leads a bass-less trio, armed with golden-toned sound and lyrically charged articulations. His penchant for morphing variable tones and pitches spawns into multidirectional frameworks, and is accelerated by the intuitive interplay he enjoys with pianist Angelo Comisso and drummer Christian Thome. Shaped by memorably melodic and stately themes, the trio's music often elicits a sense of levitation via ascending choruses and endearing harmonic developments.

The musicians' weaving improvisational jaunts are often counterbalanced by regimented procession-like unison choruses and motifs that contain dream-state attributes. But they occasionally rev it up a few notches during free-form improvs and darting call/response dialogues. Moreover, Comisso uses his synthesizer as a means for generating colorific background treatments. On "Maytime, Comisso and Thome execute a swirling undercurrent for Stockhausen's gorgeous vibrato-drenched phrasings, spiced with majestic mini-themes. Essentially, the trio sustains interest as its divergent methodology flourishes with an abundance of twists, turns and gently rolling vistas. Here, the trumpeter's resounding tone and acute improvisational skills coalesce for an outing that projects a sanctifying muse, to complement the unit's windswept thematic approach.

Stockhausen and his band are establishing parameters in jazz music that skirt the perimeters of avant-garde expressionism with classically oriented structures and ethereal soundscapes. More importantly, the ensemble defines a stylistic viewpoint that outwardly communicates an identifiable source. These are not austere museum pieces, however. In effect, the trio successfully intertwines the cerebral element with a vibe that touches upon one's heart and soul. It's among the best of many perceived musical worlds, offering a distinct paradigm that intimates an abundance of intriguing propositions.