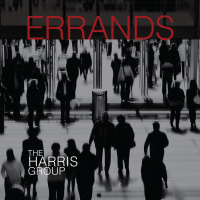 Ric Harris demonstrates a lean and mature sound on the Chicago guitarist's second release, Errands. Consisting entirely of Harris originals built around themes explored on his debut, Choices (Self Produced, 2012). Here, however, they are more evolved and account for greater textual unity.

Harris' lilting, multilayered, harmonies form the focal point of each composition. The effervescent "Bougainvillea" has a slightly retro ambience, spiced with bossa nova sensibilities, his deeply resonant tone not only leading the rhythm section but also weaving a tight improvisation that adds intellectual heft to the tune without being abstruse. A brief duet with Daniela Bisenius leads to spotlighting the violinist's agile fluidity that is part Paganini-inspired virtuosity and part Tsigan-esque pyrotechnics.

The lush and breezy "Willoway Brook" features another guest artist in flautist Jack Scott, whose mellow, wistful tone, with the right touch of vibrato, ebbs and flows over the intricate musical framework. Harris' lyrical and passionate playing expands on Scott's impressionistic spontaneity, moving further away from the melody but remaining complementary to it.

Harris masters the balance between mellifluousness and stimulating intellectualism throughout. On the mystical "The Commons" his poetic and sophisticated monologue maintains the ballad's romantic mood while deftly eschewing syrupiness. Vibraphonist Micah Rutschman's sparse choices and creative utilization of silence contribute to the hypnotic atmosphere.

On the bop-ish "The Pelikan," Rutschman's elliptical sonic motifs culminate in an intriguing extemporization," bassist Mason Cormie's sinewy, electric string-work adding a dash of funk. Cormie exhibits his dexterous handling of the acoustic bass on "Sidewalks," with a complex and expressive walking solo. Backing him is versatile drummer Tom Haugen, who seamlessly goes from reserved elegance on here, to exuberant beats on the title track.

With its ECM-informed cover art, Errands is an urbane and stylish work bristling With originality. It demonstrates a rare and successful combination of accessibility and ingenuity, and is a testament to Harris' proficiency as a composer, improviser and bandleader.