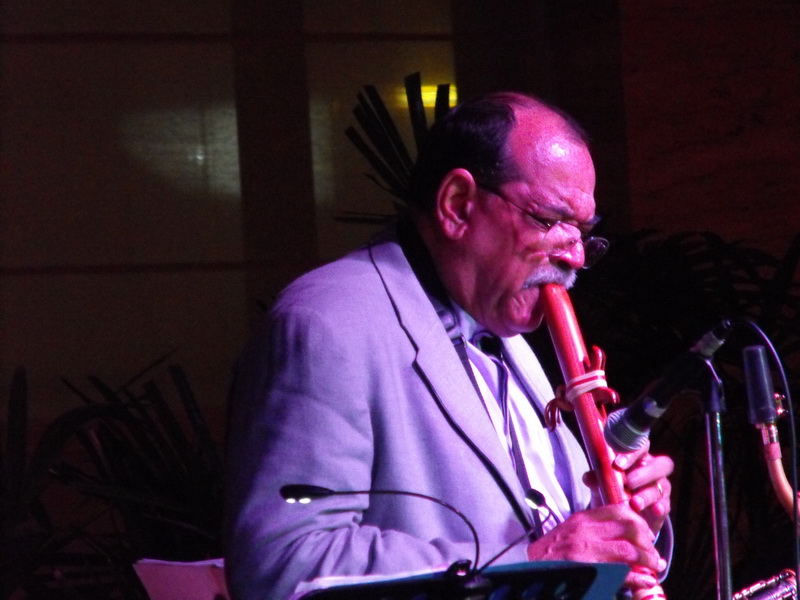 Two-time Grammy winner Watts' final performances on Saturday night filled the Living Room, and provided evidence aplenty that he's in as good a form as he's ever been in a distinguished career that began with drummer Buddy Rich's Orchestra in the late '60s, and continues to flourish today in his own stateside and European quartets—and in bassist Charlie Haden's Quartet West, which is celebrating 25 years together this year with a new CD, Sophisticated Ladies (Emarcy, 2011), and major festival appearances.

Watts always brings out the very best in those around him and tonight was no exception; Monteiro—who has collaborated with the saxophonist for the better part of twenty years—was in particularly inspired form. It's been a good year for Monteiro, with his Organamix CD Groovin' at Groove Junction (Jazznote Records, 2009) nominated for the Independent Music Awards (IMA) in the Live Performance Album category. Though awards and anniversaries serve as hard-earned milestones, both Watts and Monteiro are about the music above all else.

The highly charged—and appropriately named— "To The Point" opened the set, with Monteiro bouncing on his piano stool as he worked his keys with the dizzying energy of a Don Pullen. Watts set off with the intensity most soloists finish with, and the ever-alert Kelley was perfectly attuned, adding his own fuel to the fire. Watts enjoyed dueling with drummer Kelley in an intense duo dialogue, and later engaged Monteiro in the charging Dizzy Gillespie/ Charlie Parker bop classic "Shaw Nuff." A composer of note from the old school, Watts combined a keen sense of melody with hard swing. His exceptional composition "Spirit Song" boasted the most beautiful of heads, an Irish-sounding lament played on a Native American cedar flute, though the guts of the song lay in a steadily building post-bop workout that enveloped the audience with his melting lyricism and vibrancy in turn.

Though bop and swing dominated the set, the Johnny Mandel composition "You Are There" was a reminder of what an exceptional balladeer Watts is. Monteiro's Latin chords punctuated "Reaching Up" and his bluesy turn on "Analog Man" was a fine riposte to Watts' rousing solo. Monteiro is also capable of tremendous delicacy, as he showed on Joe Sample's lulling "Fly Away," which also featured one of Watt's most poignant solos of the evening. The change of pace was timely, after the outstanding, breathless bebop charge of Tadd Dameron's "Hothouse," whose intensity was magnified in the Living Room's intimate setting. A couple of new songs, "Twilight Waltz" and the barnstorming set closer "Bass Geige," contained all the swing, blues and passion common to all of Watts' music, and whetted the appetite for his forthcoming CD, scheduled for a late summer release.

Monteiro, Kelley, and the late bassist Eldee Young—grinning down from an appropriately larger-than-life-sized photo displayed in his honor—began the jazz tradition at the Living Room ten years ago. Based on performances of this evening's caliber, their legacy shows absolutely no signs of slowing down.