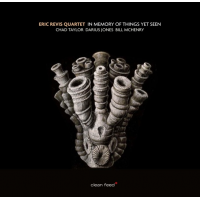 Bassist Eric Revis is a heavyweight in more than one respect. He is doing the improbable in a remarkable way, thereby ignoring collectively imposed and maintained demarcations at work. Armed with his physically very present, raw and vibrant bass sound he beats his track into the realms of freely improvised music. He made his debut as a leader in 2012 with Parallax, on the authoritative Lisboan Clean Feed label, with a dream team of Jason Moran, Ken Vandermark and Nasheet Waits. His 2013 follow-up was an even more surprising trio with pianist Kris Davis and many peoples' favorite drummer, Andrew Cyrille.

The contrasts of that trio's City of Asylum proved to be a revelation; not resting on his laurels, however, Revis has already set up his next step with a high caliber 2+2 constellation that also includes percussionist Chad Taylor, tenor saxophonist Bill McHenry and altoist Darius Jones—a lineup capable of drilling through thick boards, which actually happens on its bold debut recording, In Memory Of Things Yet Seen.

Crazy things are claimed in jazz-related writing at times, but a link between Branford Marsalis and Peter Brötzmann is no longer fictitious because Revis has played and recorded with both musicians—nine albums with Marsalis and, as a unifying matter of fact, Marsalis steps in on two pieces of this extremely fine, grinding album.

Revis is not a man to balance styles; how would such a teetering affair then sound? He plays raw and uninhibited, direct, and always full-force. As a leader, he does not primarily act as harmonizer, support player or anchor; instead, by sparking, firing up and energizing, he makes the dust fly. The nuance is in the rhythmic fine tuning; it's in the interaction with all the greatly contrasting voices that this music's branding happens. These contrasts are used by the quartet in an impressive way, with high intensity and various temperatures as fervid, truthful sounds emerge. Revis' attack is not unlike that of Howlin' Wolf , the legendary blues giant. It is the primal force of the voice and soul which is manifest, far from stylized sadness, loneliness and a smoldering longing, revealed here in thirteen pieces that are equally striking and beautiful.

Only two of the thirteen pieces—"Hits" and "FreeB"—are entirely improvised. "The Tulpa Chronicles" is spread over the whole album in three parts. The first part is the album's starting point, its ostinato vibraphone opening up a wide horizon after which the fierce roars, whacks and spanks of "Hits" tumble and fly through space. "Son Seals" is a fast, M-Base-like blues with brilliant expansion and contraction movements. It is superb how Revis and Taylor prepare the soil from which the two horns emerge with full thrust. "Somethin's Cookin'" is an apt title for the subsequent piece that, at times, comes across as a mixture of blowing Tibetan and mariachi horns.

The range of variations across the album is remarkable . "Unknown" also is a killer piece, swinging hard and raw. "The Tulip Chronicles II" is short, with great resilience and is, above all, catchy and danceable. "Voices" is a slow burner filled with Jones and Henry's full, raw saxophone sounds, with no place for sentimental moods. "Earned A Lesson" starts with a superb bass intro and possesses significant content, including a New Orleans second-line rhythm. "The Shadow World" is the decisive step to get the last slumber-heads awake. Reminiscent of Sun Ra, the qualities of all four musicians accumulate here in a highly intense way. "Hold My Snow Cone" is a slow blues, with Jones taking the torch from Arthur Blythe . The concluding "If You Are Lonesome, Then You're Not Alone" is a hymn or gospel of the future, carried by a striking saxophone duet. Catching upcoming live performances of this group is highly recommended.