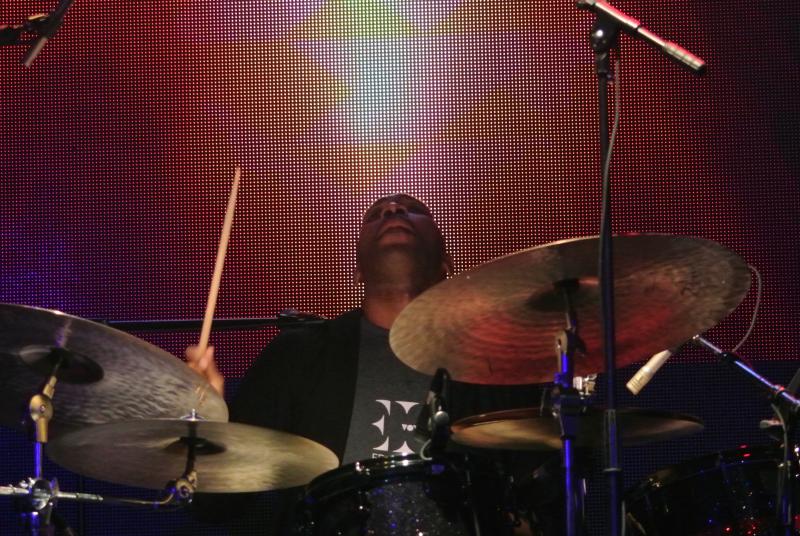 The CD release show for Vipassana (GSI Records, 2014)—the sophomore album from drummer Eric Harland's Voyager—didn't play out like a typical club set or concert; it was more like a spiritual journey through songs, segues, and seas of rhythm. Harland and his expandable/contractible outfit delivered a ceaseless flow of music for an hour and forty-five minutes. Mantras were intoned, voice was given up to the heavens, stuttered beats morphed into steady grooves, and a sense of atmospheric sound gave way to cycles of musical energy. It was an evening to remember, as concrete numbers were separated by engrossing transitional episodes, often shining a light on a single player or focusing in on a loose and liquid pas de deux.

The show began by mirroring the album, opening on the meditative "Relax" and delivering more bite with "Raghavan." The former found Harland blending voice with vocalist Chris Turner and the latter gave pause to admire the well-matched sound(s) of saxophonist Walter Smith III and the two-guitar line-up of Julian Lage and Nir Felder. Both guitarists brought intensity to the music throughout the night, but each had their own role. By and large, Lage was on a semi-playful streak; Felder, on the other hand, was trapped deep in a dream, ever-focused on potent tone painting.

While Harland, Lage, Felder, and Smith received the lion's share of attention when the band pulled out all the stops, they wouldn't have had the freedom to do so without the supportive sonic layering of keyboardist Taylor Eigsti and the bedrock bass work of Harish Raghavan. Both men proved to be fairly selfless throughout, but the music would've suffered were it not for their indispensable contributions. A pair of guests—bassist Mark Kelley of The Roots and Danny Louis Thomas, the winner of a Harland-sponsored rap contest—also added to the complex aural tapestry that Harland sought to weave throughout the evening.

Harland's polyrhythmic brilliance, flirtations with metric modulation, innovative beat sculpting, Herculean chops, and general musicality all came together beautifully in this performance. He expertly piloted powerful and moving numbers ("Singularis"), slackened and tightened grooves within a given framework, kept things simple and supportive during Turner's balladic-cum-rocking star turn ("Normal"), and followed up an odd-metered rewrite of a jazz classic ("Maiden Voyage") with a mind-blowing, drummer-on-steroids solo break that married snare and double bass. Throughout this journey, Harland proved that power and finesse aren't mutually exclusive, highlighting the fact that the meditative and the muscular can successfully coexist.