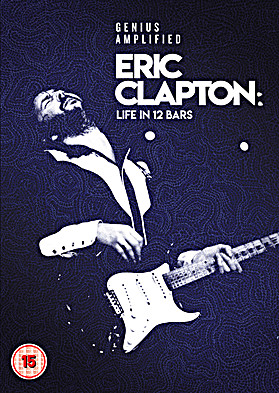 There's a point right near the end of Lili Fini Zanuck's film devoted to Eric Clapton where the archetypal guitar hero makes a solemn statement regarding the profound importance of music in his life. His declaration strikes an unusually resounding chord because it points up, with eye-opening clarity, how much the man's musical endeavors are a secondary theme to his personal travails in Life In 12 Bars.

Intentional or not, this is a film for Eric Clapton fans who can fill in the blanks in a story line where the evolution of the man's music does not directly reflect the erratic pattern of his private life. Zanuck and, by extension Clapton himself, could have vividly clarified the connections and reflections thereof over the course of these roughly two hours running time, That the film does not accomplish such an end begs all manner of questions, including most prominently, how familiar is the filmmaker with Slowhand's career and only slightly less so, why the subject did not want to help craft for posterity a more discerning all-around perspective?

A film devoted to the life and times of Eric Clapton might well seem redundant given how extensively his career and personal life has been documented via the press, the personal nature of his work (and critical examination thereof), not to mention the inspection of his various and sundry creative collaborations, all in addition to his own autobiography. Nevertheless, Life in 12 Bars presented the opportunity to collate all the threads of Slowhand's history, right in line with all the various interpretations its title implies.

Unfortunately, while the film overflows with priceless video footage, combined with more than a few insightful interviews conducted with family, friends and collaborators of EC's, what initially purports to be a meticulous and exhaustive depiction of his existence devolves rather quickly into soap opera melodrama. For instance, is watching an already inebriated man snort powder really necessary? Or close to five minutes of a rock star drunkenly berating his audience(s), interspersed with headlines of concerts cut short?

And while it's all well and good to hear Eric complain about his displeasure with the friction in Cream between bassist/vocalist/composer Jack Bruce and drummer Ginger Baker, but given the documented fact the guitarist has previously admitted to his awareness of the personality conflicts between the pair at the time of the group's formation (which it should be noted, occurred without disclosure to Clapton's bandleader at the time, John Mayall, causing a rift between those two that lasted decades itself), he sounds more than a little disingenuous.

At that point, the chronology becomes further distorted by any mention of the epiphany Eric is reported to have experienced in hearing for the Band's debut album, Music From Big Pink (Capitol, 1968). The soulful economy of that music presented a marked contrast, not to mention an inviting alternative, to open-ended improvisations he was engaging in with the seminal power trio, an approach that had become altogether self-indulgent before the announcement of Cream's disbanding in late 1968.

A similar shortfall occurs with the surprisingly brief discussion of Eric's alliance with Steve Winwood in Blind Faith. This passage crucially overlooks the bond Clapton's developed with Delaney & Bonnie and Friends, who opened the supergroup's sole US tour, a link that subsequently led to the Bramlett's production of Eric's eponymous solo album, during which process the Southern musician and songwriter vehemently encouraged Clapton to more forthrightly use his singing voice. The formation of Derek & the Dominos came about during that time as well, another important happenstance given only superficial mention except as an adjunct to recording with the Beatles' George Harrison for his initial solo album, All Things Must Pass (Capitol, 1970).

To the credit of Zanuck and Clapton, the colorful depiction of Duane Allman, founder of the Allman Brothers Band, in his role as catalyst for the epic Layla and Other Assorted Love Songs (Atco, 1970), is exactly the kind of essential connection between art and life largely missing from Life in 12 Bars. It's all well and good to mention the relative commercial failure of this masterwork, especially in comparison to the mainstream success arising from the Unplugged project undertaken in the wake of the accidental death of Eric's son Conor in 1991, but it's a major oversight for the filmmaker and Clapton (who, during the bonus content of this DVD, admits to getting periodic progress reports) to forego more precise clarification of this sequence of events; the relative commercial shortfall of the album in the marketplace only compounded the blow of how the overtly confessional piece fell on the deaf ears of Pattie Boyd, at least as Clapton intended in playing it for the source of his passion, the wife of Eric's best friend, Harrison. This painful interval was ultimately the dual harbinger of heroin addiction and then alcoholism that afflicted much of this man's subsequent solo career and, in turn, consumes the better part of the story Zanuck tells.

It may not be fair, but it is nevertheless inevitable, to compare Lili Fini Zanuck's somewhat disparate approach to the deftly interwoven narrative Martin Scorcese applied to his work devoted to Bob Dylan No Direction Home (Paramount, 2005) and the aforementioned, now-deceased Beatle, Living in the Material World (Universal, 2011). There is no criticizing how vividly she portrays the emotional wreckage of Eric Clapton's early family life here, even if the timing of the flashbacks is somewhat suspect, and she is equally astute to point out how stable and fulfilling his life is now. But a more subtle touch that might well have offered a genuinely well-rounded portrait of this great guitarist's trials and tribulations with drink and drugs; after all, in her book Wonderful Tonight (Crown, 2008), the object of Eric's affections, who eventually became his wife, has her own struggles along those lines.

Ideally, the discerning nature of such points of interest would find clarifying corollary in musical touchpoints, such as the effort of the Who's Pete Townshend to rescue the man once called 'God' from a near-terminal insularity interrupted by Eric Clapton's Rainbow Concert (RSO, 1973), of which there is not even passing mention in the film. The absence of such reference is egregious, especially when just a quick, accurately pointed acknowledgment might illustrate the wizened perspective Clapton's long-time friend Ben Palmer offers in regards to Eric's propensity for forming quick attachments, then equally swiftly abandoning them, a phenomenon in contrast to later in life, when Clapton sustained an abiding personal and creative relationship with J..J. Cale (only a quick flash of footage of whom, uncredited, appears here in any of this video).

This lack of continuity applied to Life In 12 Bars calls into question the hands-off approach Eric Clapton took to the formulation of the film. Such a laissez faire attitude has also afflicted much of Clapton's his later work and rendered it decidedly unimaginative, despite flashes of brilliance like the 2006-2007 tour with Derek Trucks in his group, documented on Live in San Diego (Reprise, 2016) (which, tellingly also features Cale, the author of "After Midnight' and "Cocaine," two of EC's signature songs). As Clapton so (overly?) nonchalantly states during the aforementioned bonus feature, a Jools Holland-conducted interview with Eric and the director and producer, he left Zanuck to her own devices in making the movie; no doubt a warranted show of confidence after their collaboration on her film Rush (MGM, 1991), for which Eric did the soundtrack music, the all too maudlin bulk of the film, not to mention its hurried conclusion, undermines the wisdom of that decision.

In all its intimate revelations and memorable scenes on video, Life in 12 Bars may be cathartic for Eric Clapton and, in a very real way, immensely gratifying for most audiences, at least insofar as viewers by and large can appreciate how satisfying an existence the man now leads-at least off the stage and out of the recording studio-after so many years of deep distress. But it is not the comprehensive biography-in-film it might well have been because it leaves true aficionados and, to be fair, some casual observers too, watching and listening between the lines or missing altogether too many important facets of what is, in its full scope, a truly compelling story.