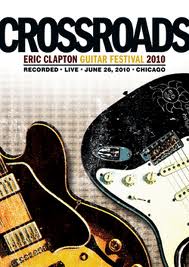 The latest in a series of festivals created, in part, to gather funds to subsidize the rehab center guitarist Eric Clapton founded in 2004, Crossroads 2010 may not have had the longest roster or the most varied list of participants, but most of the performers who appeared are presented to maximum effect in this package .

The setlist, as featured in order on the two DVDs, is creatively composed to allow for the juxtaposition of Sonny Landreth's idiosyncratic slide work just moments removed from the exquisite technique of British folk artist Bert Jansch, who in turn gives way to the equally understated Earl Kugh. Those two folk and jazz oriented players are in stark contrast to the rough and ready approach of ZZ Top, whose dirty boogie helps the group transcend the caricature that afflicted it at the height of its commercial popularity.

Then there is Jeff Beck and his primal but polished jazz-rock fusion, so expertly and (seemingly) spontaneously rendered it gives the lie to the leader's casual manner. Clapton's playing during the course of the show varies in both ingenuity and intensity. Given his admiration for Landreth,and the blues-derived likes of "Promise Land," it may only stand to reason Clapton plays with a raw intensity matching his guest there. A similar dynamic arises when Clapton shares the stage with Beck as they play "Shake Your Moneymaker," but to lesser extent: Clapton seems to be more than willing to defer to the other ex-member of Yardbirds both as a gesture of respect and also because he knows he literally can't outplay him.

The appropriately rousing finale, sharing the stage with kindred spirit Steve Winwood, finds Clapton in a role perhaps more comfortable for him than fronting his own band alone, at least judging from the surprisingly tentative playing contained on "I Shot the Sheriff" and slightly less so on Robert Johnson's "Crossroads,." Allowing the former leader of Traffic to sing as well as play guitar and keyboards frees Clapton to channel all his intensity into his guitar playing, and nowhere else this day does he sound more passionate and inspired than on Blind Faith's "Had to Cry Today" and Jimi Hendrix' "Voodoo Chile" (the original recording of which found Winwood on Hammond organ with the late guitar icon).

The insertion of spoken word and interview segments such as those with bluesmasters Hubert Sumlin and Buddy Guy, as well as the younger generation including Derek Trucks, Gov't Mule/Allman Brother Warren Haynes and Los Lobos' David Hidalgo, actually supports the pacing of the DVD. That said, it might have been worthwhile to include more extended conversations with the likes of those players and others as bonus features to this set (or perhaps given the technology at hand, providing access to such segments as they appear in abbreviated form in the liner sequence of the program).

With cameras roaming around Toyota Park's audience, the stage and behind it, it becomes simple to feel immersed in the experience as it happened that hot summer day in June 2010, especially as the sound quality of the recoding is as clear, clean and full as the video. But to fully appreciate