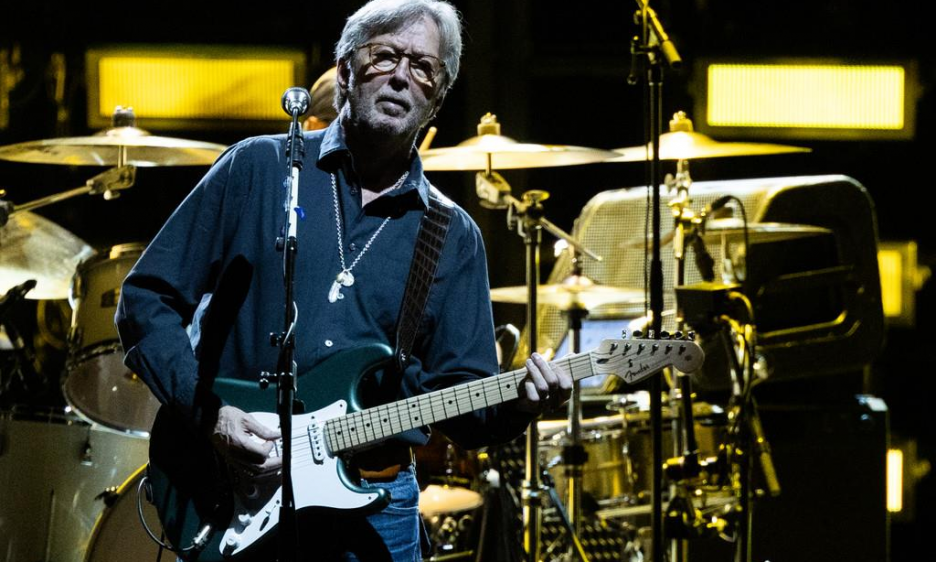 In his hands is the instrument of eternal damnation and salvation and a passage ticket either in hell or heaven. He is a master guitarist and a mythical beast whose songs and guitar virtuosity have elicited the entire spectrum of human emotions for the past 60 years. Ever since Eric Clapton emerged in the early '60s he has created a fluid and dynamic body of work that has managed to reach a colossal variety of people worldwide. Regardless if the quality of his music has gone up and down during those times, his stature never vanned including the admiration and the respect for his dedication to music. And after years of listening to his music finally I got the opportunity to see him live on his 2019 tour stop at Wiener Stadthalle in Vienna, Austria. In recent years, due to health issues, he has retired from full scaled touring and has opted for brief spot dates. This concert was part of a brief tour that saw him performing in Japan, England, Germany, and Austria.

The band including Clapton walked in totally unceremoniously and quietly took their positions even though they were greeted loudly by the sold-out arena and got down almost immediately to punch out several dynamic rock songs and blues covers. With an explosive drum beat, the band announced itself with the dynamic and heavily distorted "Pretending" and with each new song they generated more energy by bouncing through songs such as the classics "Key to the Highway," "I'm Your Hoochie Coochie Man" and a rockier version of "I Shot the Sheriff." His group has a formidable percussion engine in drummer Sonny Emory and the very able bassist Nathan East augmented by guitarist Doyle Bramhall II, keyboardist and vocalist Paul Carrack, keyboardist Chris Stainton and singers Sharon White and Sharlotte Gibson. Except for an occasional "Thank You" Clapton didn't address the audience at all between the songs. That left you with the music which did all the talking and which was presumably what the audience was there for in the first place.

And Clapton is a hugely engaging presence. He exudes a sort of effortless charisma and a formidable aura despite rarely moving from the spot where he picks and strums. With his eyes shut, he would lean into his guitar or backward and would get lost in the soaring and fluid sounds on his guitar. There was something particular, raw and unusual about every individual sound he produced on his instrument. He is an old tiger but nevertheless, he is still a formidable deity. Obviously, the emotions that still drive him come from somewhere very deep and it still hurts.

What followed was an "unplugged" session when Clapton took up position in the center where a big Persian carpet was laid and he took an acoustic guitar for the rendition of another set of classics: "Driftin' Blues," the infectious "Nobody Knows You When You're Down and Out," 'Tears in Heaven" which had a light reggae touch to it and boasted huge applause from the audience. The same roar flooded the hall when he performed another classic, "Layla" but with the "Unplugged" arrangement and the acoustic set closed with "Running on Faith." It was as though the crowd of more than 10,000 was privy to an intimate studio jam session. He followed this set with upbeat renditions of two of his classics: the mid-80s hit "Tearing Us Appart" (originally a duet with Tina Turner and now with one of the backing singers) and the gospel —like "Holy Mother," a song that famously was inspired by Prince's "Purple Rain" and a plea for help when he was in the grip of alcohol abuse. The Robert Johnson's classics "Cross Road Blues" and "Little Queen of Spades" were raw, dirty and full of salacious solos which were traded with Doyle Bramhall II who all throughout the concert traded spots with Clapton both as accompanist and soloist. By the time the band started playing "Cocaine," the crowd jumped out of their seats and ran to the stage (including me) and ended the set on a high note.

The encore with "Before You Accuse Me" was the perfect end to a show that was a brilliant display of musicianship and artistry. In an era when virtuosity in rock music isn't celebrated as much as it used to be, it was thrilling to watch a master at work. Despite his recent health maladies, he proved that he still has the energy and the chops to make a fantastic concert. Eric Clapton still has it. He is still a God.