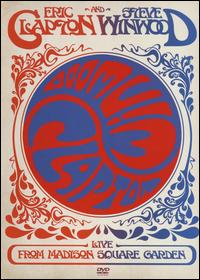 The garish pseudo psychedelic cover graphics of guitarist Eric Clapton and keyboard player and guitarist Steve Winwood's Live From Madison Square Garden package mislead. These recordings taken from a three night run at the hallowed venue in 2008—included in almost identical form on a double audio CD set and the first disc of the double DVD set—are not an exercise in late 1960s nostalgia. Rather the pairing reignites the chemistry between two musicians whose talents are remarkably complementary. Clapton and Winwood relish playing together because intuitively they realize their chemistry is the source of the mutual inspiration.

But the level of pleasure and creativity rises higher than that. The concert footage shot in the cavernous venue includes less effects from the stage lighting than from the sense of close-knit repartee among all five musicians in the band: bassist Willie Weeks and drummer Ian Thomas play so formidably because they seem to enjoy their roles as much as the two principals: nods of recognition and shared admiration go all around, the definition of fraternal warmth.

The version of "Well All Right," the Buddy Holly paean to teen love included on the historic Blind Faith album echoes that sentiment of brotherly kinship, besides being a clever coupling with the jaunty Traffic instrumental "Glad." Keyboardist Chris Stainton may be the virtual invisible man but he's certainly not inaudible, his remarkably authentic faux horn parts on the tribute to drummer Buddy Miles on "Them changes" testament to why he's made a career as a savvy, tasteful sideman since the days of Joe Cocker's Grease Band. Noteworthy too is the sound of two keyboards on "Presence Of The Lord," where Stainton's organ, along with Winwood's piano, clearly recalls the instrumental lineup of The Band, of whom Clapton became so enamored in the latter days of Cream in 1968. Hearing this rendition suggests it is Clapton's effort to write in the style of that iconic unit.

The uncluttered MSG stage might well have been any one of the participant's home studios where the quintet had joined together just to play for the fun of it during a time off the road (the set list was in fact a scaled down composite of suggestions from Clapton and Winwood culling from each other's discography). The camera work takes the same no-frills approach to the video as the artists did to the presentation of the shows, which is to say the musical connection between Clapton and Winwood takes precedence over everything else. A plethora of shots from all manner of angles capture the two in various stages of playing and singing. There's the definite sense that the harmony singing, for one thing, is nothing less than the spontaneous expression of unmitigated joy the one man feels from hearing the other's voice, keyboard or guitar expressions.

The second DVD is a noble attempt to elucidate the conception and preparation behind the staging of the shows. Hearing Clapton and Winwood speak so matter-of-factly of the evolution of their music since the 1960s does indeed go a long way in depicting the roles each of the two principals assumes in the process of these 2008 shows.

The friendship arising from the duo's mutual passion for music is very near the heart of this current success, especially hearing the two men talk about their schooling in the blues: in a direct reflection of the music they chose to play, there is a blues theme throughout the conversations. Even more interesting than Winwood's humility is Clapton's inference of the concerts as a retro move for the two: his comment about a stepping back to that earlier time is juxtaposed with shots of the MSG band performing Robert Johnson's "Crossroads."

There is nothing particularly distinctive about the technical features of the DVD package itself, in keeping with the aforementioned no-frills approach to the performance itself. The excerpts from the interviews that appear on the performance DVD interrupt the natural theatre of the concert itself and might have been better left as an optional feature available as part of the format's technology, particularly since are direct excerpts, not additional comments. The inclusion of footage of Blind Faith's Hyde Park concert (which has never seen official release), Cream's 2005 reunion and the Winwood appearance at Clapton's Crossroad's Guitar Festival in 2007 almost begs for the "Easter egg" approach that would allow the viewer to click a button and see the detail of what he's watching: it may not be trivia someday to know Winwood appeared on stage with Derek Trucks.

And again given the emphasis on blues as well as the leaders' dialogue on their own history, some discographical information, for the principals as well as their influences, would definitely be worth including. The true fan would no doubt also be fascinated to hear how the band members were chosen as well as how the setlists were arrived at.

By the time the two discs are finished, it has become clear that Clapton actually benefits the most from this partnership. Freed from the role of sole frontman, he doesn't have to be concerned about doing all the singing—though he does takes his turns, to most moving effect on blues numbers such as "Double Trouble—and thus channels energy otherwise diverted into his guitar playing. The intensity Clapton brings to even craftsmanlike fluff like "Forever Man" and "After Midnight" and even Winwood's sole lightweight contribution, "Split Decision," is in proportion to his status as a legend. And when in the throes of performing material close to his heart, such as guitarist Jimi Hendrix's "Little Wing" or Derek and the Dominos' "Tell The Truth," Clapton's passion rages, albeit through the simplicity of phrasing that is his hallmark and his most fundamental root in the blues.

Winwood took second billing, and rightfully so, for these shows, because he hasn't held on to mainstream popularity for the length of time his partner has. Yet, based on his performance as a singer, guitarist and multi-keyboardist during these shows, the former leader of Traffic may find his reputation benefits from the visibility afforded this work with Clapton. His singular voice has changed little over the decades, but it is his phrasing that makes Traffic's "No Face No Name No Number" a showstopper (more so even than on his solo performance of "Georgia On My Mind"). The glorious riff rock opener, "Had to Cry Today," suggests if he had concentrated on his own electric guitar talent, he might even have become Clapton's equal. Yet the way his fingers go dancing along the ivories for the blues shuffle of "Sleeping In The Ground," (an outtake from the duo's Blind Faith collaboration in 1969) begs the question of whether he's really a natural keyboardist at heart.

The unity Clapton and Winwood display on the Hendrix cosmic blues "Voodoo Child" is the pinnacle of the two-disc set: the former's move across the stage next to the latter seated at the organ is only the beginning of an extended interval of galvanizing drama. Winwood wails his way through the vocals, unleashing waves of Hammond B3 even more forcefully than he did when playing on the original version (Electric Ladyland, Reprise, 1968), while Clapton plays like a man possessed, simultaneously channeling his admiration for his lost guitar peer and his kindred spirit in musicianship right next to him.

Visit Eric Clapton on the web

Visit Steve Winwood on the web