After Philadelphia musician Eric Carbonara recorded his album The Paradise Abyss (Nada Sound Studio) in early 2010, he set out on a mission to be personally involved in each level of its creation. In addition to writing and performing the album, Carbonara designed and painstakingly hand created each flawless CD digipak and LP sleeve and self-released the record. The album features Cabonara on solo nylon string guitar performing seven compositions in his singular style which draws from Indian, Flamenco, and Americana influences. On November 20, Carbonara celebrated the release of his new work at the Highwire Gallery in Fishtown.

Philadelphia steel-string acoustic guitar duo Little Ocean opened the show with a short set. Ben Remsen and Jake Anodide have been collaborating as Little Ocean for several years and in that time have developed such a strong duo vocabulary that when they perform, their instruments sound inseparable, as if they are actually performing on one giant guitar. For their set, they opened with a brief rubato piece full of bent strings and low drone notes that served as somewhat of a warm-up.

Their second piece was more typical of their style, exploring the contrast between heavy pulse and free time as repetitive interlocking phrases opened up into arpeggios with carefully approached dissonances. For their third and final piece, they were joined by harpist, Jesse Sparhawk. This piece found the trio creating Reich-ian arpeggiated patterns that wound around each other, constantly shifting shape. As the piece evolved, short interjections of free-time arpeggios created a moving contrast to the main theme. Sparhawk's harp sharpened the details of the two guitars and helped create a lusher group sound. 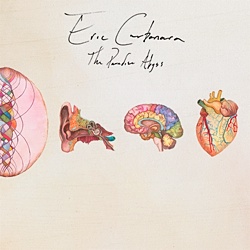 By the time Carbonara sat down to perform, the audience had filled the gallery to standing room capacity. He immediately captured their attention with the opening arpeggio of "The Abortion of Autumn," the opening track from The Paradise Abyss. This song features separate sections that float in time, each creating a unique mood as if it were the soundtrack to a scene in a classic work of film noir. In master storyteller form, Carbonara heavily dramatized the piece by building suspense as he gave each section plenty space to breathe, letting each dark chord sit in the air before making a dynamic leap into the next section.

The next piece, "Draw Me Out," evoked a similar feeling, opening with a jarring arpeggio that led to the beautiful Spanish-style melody upon which the song is built. Carbonara performed versions of the driving "Gaggle to Jolly" and the tremolo feature "Infinite Breath of Lady Greenland" that were faithful to those found on The Paradise Abyss. He used a 6-string banjo for "Charles Smokes His Cigarette," which helped to evoke the darker edge of the song's blues-y nature with the instrument's gritty timbre.

For the final piece, Jesse Sparhawk joined Carbonara to perform "The Entwined Twin," an extended composition from their unreleased duo album, Sixty Strings. Carbonara used his upright chaturangui, a beautiful 22-stringed instrument built by his teacher, Indian slide guitar master Debashish Bhattacharya. The piece began slowly, with bright chords played in unison, before stating the ascending main theme. As the energy built, Carbonara kept the pulse as Sparhawk played a solo with a long arc, building slowly and growing increasingly more rhythmically complex around crashing chaturangui chords. For his solo, Carbonara built melodic phrases that grew in length and intensity over the pulsing harp drone. The end of the solo took a thrilling turn as a metric modulation found the tension escalating until Carbonara crescendoed on a riff before both returned to the melody, now faster and in a new meter. Each ascent of the melody increased the tension before reaching a final dramatic chord, providing an epic conclusion to a powerful performance.

With the official release of The Paradise Abyss, the guitarist can turn his focus away from hand-making album covers and shift his attention back to his studies. This concert was Carbonara's final performance before embarking on a trip to India to continue his work with Bhattacharya after which he will set out on a European tour.