By SAMUEL CHELL
November 15, 2006
Sign in to view read count 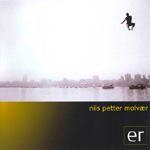 Upon reading the titles of the tracks on er, I was prepared for a Windham Hill sampler of programmatic nature-music pieces. But Norwegian trumpeter Nils Petter Molvaer's muse, it soon becomes evident, is more closely related to the genius presiding over In a Silent Way, Bitches Brew and similar projects by some of Miles Davis' '70s progeny. It's New Age music with a beat, but with nuanced textures mixed so deliberately and motifs insinuated so subtly that the inattentive listener is likely to destroy or miss altogether the gossamer fabric of these fragile yet frequently appealing, inviting constructions.

Molvaer's trumpet is far too much in the background for this music to be mistaken for a Miles Davis session. Instead, the horn becomes another sotto voce voice floating in the sonic ether, whether producing muted plaintive sounds without the mute or suggesting a momentary chill when Molvaer blows through his mouthpiece sans horn. Even the multiple tracking of the instrument along with the layering of bird calls and human voices does little to disturb the Noh-like stillness of "Water," following "Softer" like diaphanous gauze yielding to the glimpse of a golden carp suspended in a moon-lit pool.

"Only These Things Count" is verbalized, sung moreover in English, thus threatening to rupture the listener's connection with the safe and magical harbor of the musical Zen garden. But soon the churning textures of the accompaniment lead to another quiet, intimate moment during which Molvaer's breathy trumpet supplies incandescent incantations over a single sustained pitch, a note evoking a wordless plainsong resonating with the dynamic energy field that is consciousness itself, the solo trumpet representing one microcosmic instance of its human manifestation.

The next piece, "Darker," momentarily establishes an almost funky groove, perhaps Molvaer's turn to run the voodoo down, but soon the direction the trumpet takes is once again upward, as "Feeder" offers the most extended, extreme trumpet solo on the CD—loud in dynamics or high in register only relative to its previous role as little more than a supernumerary in the ambient mix. The role of the trumpet as an "individual" voice is both a tenuous proposition and open-ended question in music of such exacting scale and ecological balance, but perhaps the matter is made less problematic with the concluding composition.

"Dancer," the final piece—or, more precisely, movement of a continuous work (there are no silences between the compositions)—is descriptive of the acoustic properties of the piece itself, which emphasizes the rhythms of primitive percussion. But it's also an interpretive, revelatory key to Molvaer's paradoxical and poetic, even mystical, construction of pieces that qualify neither as ambient sound nor tone poems for trumpet.

Overall, er is a delicate but vital and indivisible organism, recalling if not affirming the understanding implicit in the poet W.B. Yeats' famous question about the relationship between the artist and his creation: "How can you know the dancer from the dance?"