By DAN MCCLENAGHAN
January 14, 2015
Sign in to view read count 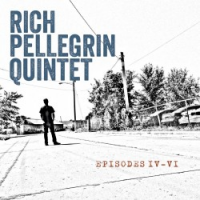 Pianist Richard Pellegrin offered up his first installment of Three Part Odyssey (OA2 Records) in 2011. It's a musical journey inspired by travels through Europe and North Africa. Employing a superb quintet, three "Episodes" blossomed from a first rate collective approach. Pellegrin and his group follow this up with Episodes IV-VI, featuring a slightly more reflective mode, added to the same originality, top level musicianship and crafty, compelling compositions.

The music—all by from Pellegrin's pen—eschews, for the most part, stand-out-in-front soloing—or perhaps the soloing is so well-incorporated into the sounsdscapes that it just seems that way—and features a lubricated, steady momentum. Pianist Pellegrin employs a good deal of repetition, giving the music a mesmeric quality inside an ensemble sound that seems undulate between a beautiful constraint and an on-edge, pushing the boundaries restlessness. A similarity to the ECM Records of Tord Gustavsen can be made. The players seems to breath in unison and exude a sonic homeostasis, though Pellegren's group has a decidedly livelier metabolism. Another parallel is the feeling of the sound sailing somewhere in the middle of the spectrum between "jazz" and "21st century classical music." "Episode IV—Vigil" leans over toward the avant-garde, swaying from the grand—underlain by the fiery—to the unsettled and "out there" side of sound.

"Episode I—Intention," opening with Pellegrin's very supple repeated piano notes, has a tint of the secular. Enter the trumpet and saxophone conversation to pull things in the direction of the temporal. "Episode IV—Affirmation" has a subtle yet implacable majesty, and "Episode VI-Epilogue" rumbles to life on rolling drums, sounding slightly strident, urgent and foreboding, as if things—Part Three of the Odyssey, perhaps, could travel into darker territory. We'll have to wait and see.