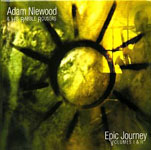 Post modern jazz musicians like New York-based multi-reed instrumentalist Adam Niewood are sometimes more adroit at pushing boundaries in terms of incorporating non-traditional instruments and equally non-traditional compositions. Niewood wrote most of the tracks on Epic Journey, Volumes I & II, composing with a mind toward letting the instruments speak in their own voices while overlapping a bigger picture as the main anchor of each piece. The result is what might be imagined, if the entire quintet had an even-hand in creating each selection. In fact, Niewood's group, the Rabble Rousers, fully improvises almost half of the two-disc set.

Volume I opens with "Demented Lullaby," sounding almost conventional at the start before quickly breaking off slightly off-centered and with rapid chord changes from pianist Kristjan Randalu. Niewood's saxophone solo is self-assured and imaginative, but he doesn't attempt to dominate the proceedings, giving both Randalu and bassist Matt Brewer a good share of outstanding solo time. The nine-minute "Where's the Cat" begins ballad-like, before Niewood's extended solo starts to generate some real heat. Randalu, here on Fender Rhodes, carries much of the second half without descending into fusion. "Out of the Woods, for Now...," at an ambitious twelve minutes, is loaded with time changes and rapid, John Coltrane-like lines from Niewood on tenor. Guitarist, Jesse Lewis takes a long solo that, in its late stage, brings to mind Carlos Santana. It's a great piece in which to lose one's self, but with no sense of isolation from the music.

What may be surprising is that the two most melodic pieces in the set are found in Volume II's free improvisation subset. A short, moving bass solo from Chris Higgins on "Loved Ones" blends into a beautifully soulful performance by Niewood on tenor. The piece transitions into an equally striking solo by Randalu. "Calm Before the Storm" is a bit more animated, but again its satisfying harmonies at the center of the work add contrasting dimensions to the music. Randalu floats above Niewood's fluid lines like a dream sequence, while Rohin Khemani's cymbals tie the two together. In contrast, the second volume closes with "Five Corridors," a far more aggressive free jazz piece, though it is neither free improvisation nor discordant.

Volumes Iand II are subtitled "Based on a True Story" and "Epic Journey," respectively. The significance of the labels is unclear, but two discs are primarily distinguished by composed music and the free improvisation found on seven of the nine tracks on Volume II. There is, however, enough of an improvisational feel to the composed music, and tautness in the free improvisations, to blur the lines between them. Niewood has played with this group for a number of years, and the symmetry amongst its members is obvious. Niewood is an extraordinarily talented composer and multi-instrumentalist, and Epic Journey deserves a wide audience.