By JEFF DAYTON-JOHNSON
December 31, 2008
Sign in to view read count 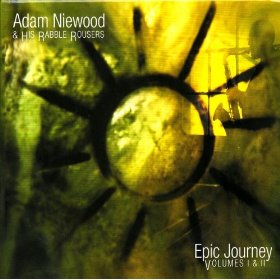 Adam Niewood's Epic Journey, Volumes I & II is the third vertex in an isosceles triangle of recent releases, the other two points being Noah Preminger's Dry Bridge Road (Nowt, 2008) and Chris Potter's Follow the Red Line: Live at the Village Vanguard (Sunnyside, 2007)—records by saxophonist-leaders ranging from reasonably to very young, with similar instrumentation—notably electric guitar—and excellent execution. Niewood's record has a bit of the funky looseness of the Potter disc, with Kristjan Randalu taking Craig Taborn's Fender Rhodes part. It also has a lot of the formal rigor of the improvisation and composition of the Preminger record.

What Epic Journey adds, for want of a better word, is freedom—in the sense of free jazz. Niewood bears more than a passing resemblance to Anthony Braxton; like Braxton, he plays just about every conceivable saxophone on this record, and a few other reeds besides. The melodic line of "Not Quite Right," meanwhile, has a little of the demented marching-band sound of some of the elder master's compositions. But Niewood also draws from that other great source of freedom, the energetic playing inspired by John Coltrane (as does Chris Potter, despite his groovy populism).

The vast middle section of the second disc—indeed, the more challenging of the two— is a suite of collectively improvised numbers, ranging from tranquil and contemplative ("First Sign of Clarity") to raucous ("Breaking and Entering," with screeching saxophone worthy of Peter Brötzmann). The first disc, meanwhile, is subtitled "Based on a True Story," which may be Niewood's way of telling us it relies more on conventional composition.

For all their differences, there is an interesting symmetry between the two discs; one is like the inverse image of the other. On both, there is a lot going on—careful composition and arrangement, busy and multi-layered improvisation. Nevertheless, the music on both discs communicates a solid sense of resolution. How that happens—the resolution strategy, if you will—differs between the first and second discs.

On the first, busy, fast-moving, complicated activity in the rhythm section is held together, embraced, by means of slow-moving, overarching melodic lines, as on the wistful and funky "Reprise," on "Demented Lullaby," or on the sumptuously-arranged "Where's the Cat???," the long melodic lines of which sound vaguely like John Coltrane's "Equinox." On the second, freer, disc, the busy, complicated stuff comes in the higher register—the horns, the guitar, the keyboards—and the resolution is provided by driving, rock and roll inflected beat. This ends up sounding like some kind of fusion, and that's not at all bad.

This is a long set—nearly two hours—with plenty to enjoy along the way; pianist Randalu's slightly mad melange of Bud Powell and Scriabin is surely among the highlights. The drums on the second disc, the melodic airs on the first, provide a welcoming coherence that will win over even those who consider themselves allergic to the free. Everyone else will enjoy the show, too.

CD1: Demented Lullaby; Ella Bella; Not Quite Right; Electoral College; Where's the Cat???; Reprise; Out of the woods, for now...; Mellow Drama; Child Psychology. Disc 2: Entirely Too Tonal; Movin' & Groovin'; Loved Ones; Calm before the storm; A rap tap TAP in the night; First sign of clarity; Breaking and Entering; Stimuli; Five Corridors.