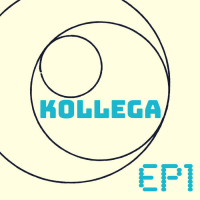 The self-titled debut from UK-based Kollega is a brief and eclectic collection merging multiple technologies with acoustic and electric instrumentation. Bassist Dave Shooter—the de-facto spokesperson for the quartet—explains that the group sound is influenced by the likes of the electo-acoustic Nerve and Aphex Twin, and while there may be a trace of the Richard D. James Album (Warp Records, 1996) in Kollega's EP 1, the sound here is unique to this young group of innovators.

The bassist says that over time he has been increasingly integrating effects into his music and using a sequencer and digital audio workstation, for writing and performance, controlling sounds in real time. Guitarist Lerøy Luptøn also utilizes synthesizer and electronics along with the particularly critical tasks of recording, mixing and production on EP 1. He and Shooter created the loops on this recording and also have an all-electronics/synth offshoot duo, Kollega Elektronikus. Tenor saxophonist Matt Robinson and drummer Ben McCabe account for the acoustic half of Kollega and worked with Shooter extensively for more than ten years.

"Smooth Like Ken" opens the album; its title coyly vague on the Kollega Facebook page where potential namesakes from Kendrick Lamar to Kenneth Branagh pop up. Beginning with electronics, Robinson's soulful tenor comes to the forefront before a back-and-forth and, eventually, a merging of sounds. The sax growls on through McCabe's steady, ominous beat on "Benidorm Monitor" while the escalating alarm of effects adds to the intensity of the piece. "Arc Light" is the more complex of the compositions; at times it has the funky groove of classic Steely Dan, at others, sax-driven hard bop or a floating wave of tranquil electronics.

The intriguing thing about this kind of blended music lies in its inherent risk. It can come off as dated 1980s style fusion or it can be uniquely organic. A diverse cross-section of experimental jazz masters such as Pauline Oliveros, Abdul Moimême and Rob Mazurek are exceptions rather than the rule when it comes to creating works that are extraordinarily musical, animated and captivating. Kollega shows every indication of entering that territory based on this initial outing.