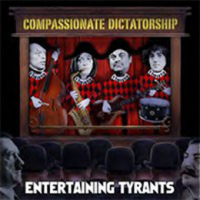 Six years after its debut album, Coup D'Etat (FMR Records, 2007), and three years after its follow-up, Cash Cows (FMR Records, 2010), Compassionate Dictatorship returns with Entertaining Tyrants. Album number three finds the London-based quartet moving away from the influence of progressive rock, which shaped some of Cash Cows, and into a sound that is much more focused on contemporary jazz. The band's musicianship and accessibility remain high, though, ensuring that Entertaining Tyrants is highly enjoyable.

But first, the thorny question of that ambiguous album title. A description of the band, or a mission statement? Of course, in this context "entertaining" is a verb, not an adjective. If any proof is needed, the presence of Stalin and Hitler on the cover photo should clinch it.

Franks and Freestone share the writing credits (the jumpy, angular "Precious" is a joint composition). Franks' "Anger Management" typifies the band's energetic pace. Some of Franks' finest playing comes on Freestone's "In The Chophouse." The saxophonist's "Universal 4" gives her the opportunity to engage in some fine unison playing with Franks, over an equally impressive rhythmic foundation courtesy of Høiby and Maddren, before the bassist takes center stage with an assertive solo. Franks' calm and lovely "Ratios" showcases Freestone's tenor while the saxophonist's "Pottering Around" gives equal space to each of the four players. The album closes with "Loop," a gentle number that centers on Franks and Freestone's relaxed interplay.

Even in the contemporary world, tyrants offer a rather limited market for a jazz ensemble, however entertaining it may be. Thankfully, Compassionate Dictatorship plays music that's full of appeal for those with less of a desire for world domination.