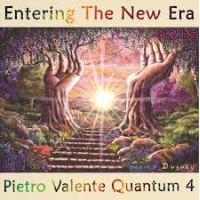 Ace Italian drummer Pietro Valente enters the new era by having the musicians tune their instruments to 432 Hz. In the album notes he states that, "This recording has a feature that makes it one of a kind: Recent studies show that tuning at 432 Hz is more in harmony with human body vibrations." Thus, the overall vibe, and response would be factored in on a per-listener basis, yet I detected the warmth and amenable tone from the onset. More importantly, Valente's energized production, gushing with memorable jazz-centric tunes that are shaded with journeys into the outside realm. Here, vocalist Alessia Obino's charter is to serve as an additional instrument via wordless vocals.

The album contains gorgeous melodies amid supple characteristics and whirling time signatures. The band is highly active and very productive. Musical notes aren't wasted. And several works feature cascading and ascending thematic statements with harmonically attractive constructions. Superlative musicianship and a razor-sharp focus leads to triumphant choruses, circular ostinatos and malleable progressions. For example on "Natural Order," the band zooms in on a sprightly bop and scat vocal motif, and "Omnicracy" is shaped by trombonist Filippo Vignato's brawny improvisation segments and pianist Marco Ponchiroli's intersecting lines. But they launch into a crunching backbeat and elevate the pitch while assuaging matters down to a near whisper for the finale.

Obino mimics Vignato's phrasings during the free-floating and good-timey outlook portrayed on the delightful piece "100 Years Jump," while transferring the groove into funk-rock vistas and bluesy overtones. Whereas, "Space Exploration" is led by the drummer's pumping odd-metered beats, contrasted by Vignato and Ponchiroli's brisk workout, seguing into a polyrhythmic wonderland, tinted with understated textures and impacting unison lines.

To parallel movie critic lingo, Valente has produced a riveting and action-packed gala, exercised with an array of rapidly moving parts that excites the mind and calms the soul. It's a masterfully envisioned rendezvous and a top pick for 2014.