By GLENN ASTARITA
February 21, 2015
Sign in to view read count 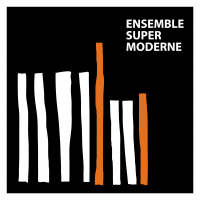 Portugal has become a state-of-the-art hotbed for creative jazz musicians and improvisers, duly represented by driving forces such as the Clean Feed record label. And Ensemble Super Moderne is another exciting Portuguese unit that skirts the outside realm by surging into ultra-progressive modern jazz persuasions. Hence, this self-titled album, housed in an oversized 45RPM sized CD jacket, offers a bountiful aural feast for jazz enthusiasts who demand something new and exciting to enter their listening space.

These folks generate many subtle surprises on a continual basis. They sprinkle a consortium of terse phrasings with false endings, odd-metered horns arrangements and tricky time signatures amid a few lighthearted Zappa-esqe oddities. Essentially, the program moves in various directions as they sustain a great deal of interest with wailing breakouts and some jazz fusion like episodes when guitarist Eurico Costa turns up the heat. With motifs built on March progressions and changeable metrics, the ensemble's sly arrangements provide conclusive evidence that a lot of planning and resolve were morphed into the grand schema.

The musicians assume a little big band makeup on "Modern," where José Pedro Coelho's softly iterated sax lines ride above a soft 2/4 pulse, quietly accelerated by the budding horns arrangement, countered with Carlos Azevedo's brief honky-tonk piano detours. And the popping horns and shifty exchanges create a sense of drama that segues into the following track "The Dreary Life of Pugnacious Cacti," highlighted by English spoken word about someone whose promotion was revoked due to budgetary reasons. Hence, it's a quirky and delectably offbeat tome. However, the final piece "A Ultima Cancao de 2013," operates within step-ladder type advances, circled by Azevedo's rolling piano phrasings and culminated by Coelho's soprano sax driven, climactic unison choruses.

In sum, this band doesn't take any siestas by delving into saucy ballads or posing imagery of ethereal dreamscapes. It's an action-packed forum teeming with intricately executed arrangements and attention-grabbing theme constructions, as each composition bids a newfound vista, packed with a broadly entertaining group-centric disposition.