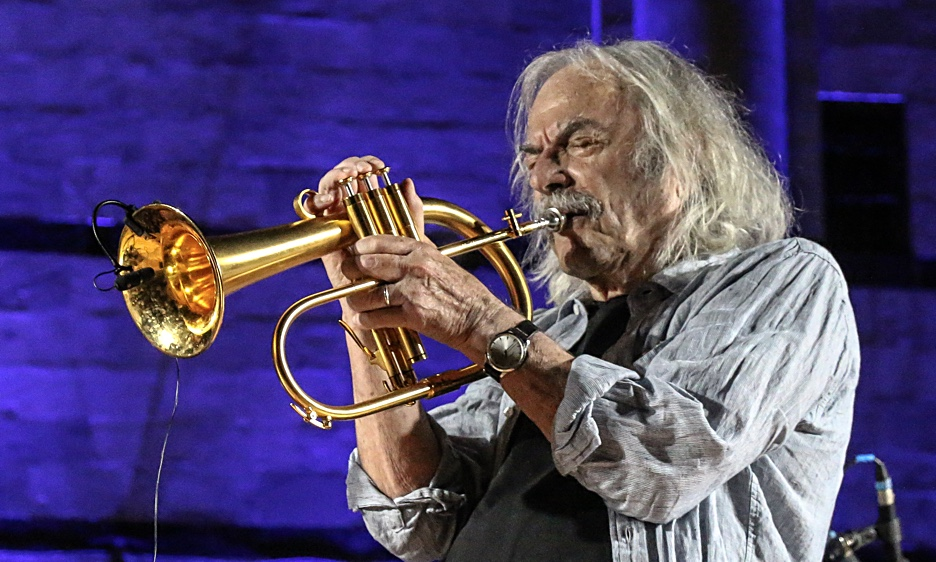 Enrico Rava, the musician who almost single-handedly gave Italian jazz an international profile in the '70s with his recordings, turns 80 this year and celebrates the milestone in the way he knows best: in music. He's touring with a Special Edition of his band, a flexible unit gathering many of the young bloods he worked with in the past decade or so. Rava's place in European jazz history is, in fact, definitely linked not only to the supreme quality of his music, but also to his systematic search for new talents that he constantly led across the decades, bringing under the spotlights generation after generation of younger Italian jazz men.

The music began informally, the musicians walking casually on stage and picking ideas out of thin air; soon the sound jelled into one of Rava's originals, taking momentum. In quick transitions, a dialogue established itself within the group, solos developing and intertwining. At times the music hovered on the edge of chaos, and yet it at the same time it always made perfect sense. A free collective and a romantic melody seemed to wrestle for control, then from nowhere the horns coalesced in an harmonized section that might turn into a big band riff or a solemn brass church hymn; under the very eyes and ears of the listeners, the creative flow was modeled and transformed with musical gestures, looks, and hand signals by the white-haired magus.

The music twisted, turned and kept listeners and musicians alike on the edge—they were relaxed and even joking on stage, but never missed any little signal from the chief, who chose, on the spot, which tune would segue into the next, building little suites from his own compositions, played over the years with these musicians in different configurations. The sound whirled like a maelstrom, and in the middle of it Rava just basked in the energy created by his young, fellow travelers, when all of a sudden in an empty space his fluegelhorn was left alone, delineating an elegant arc of melody with his burnished voice, commanding breathless attention from the audience. Then a drum tattoo and an ostinato bass figure shifted the scene to funky, and Petrella didn't miss the chance to strut some of his Fred Wesley stuff. After every turn, a new panorama opened in a musical travelogue that also told the tale of a rich musical life.

Electric guitar and electronics wizard Diodati was left free to roam, and his subtle contributions transformed the contours of the music, apparently minimal but continuously opening spaces and vertiginous vistas of sound; Petrella contributed an astonishing variety of colors and his explosive trademark phrasing, slurs, tailgates and acrobatics. Hard-edged tenor man Bearzatti played the perfect foil to Rava's phrasing. Pianist Guidi, despite frequent disturbances from the bad boys in the band, was always there to introduce, connect and improvise, evoking the masters of modern piano—maybe influenced by the fact that he was just back from a South African tour, some Abdullah Ibrahim ostinato figures could be found, but he's definitely been maturing into his own man. Double bassist Evangelista and reliable drummer Morello, much in-demand talents that recently emerged on the scene, kept the flow going, were always quick to answer to the sudden changes in atmosphere, and made the most of their allotted solo space.

The finale, or maybe what was intended as an encore, was one of the oldest chestnuts in the book: "Quizas Quizas Quizas," made popular by Nat King Cole but "written" by Cuban composer Osvaldo Farres—who, according to music lore, could not write music and hummed his songs to a transcriber. The spaced-out version from the Rava crew included nods to old accomplice Gato Barbieri and old-style dance band passages worthy of a Fellini scene, and managed to be great fun while respectful to the tune at the same time.

Despite the extreme heat and humidity in the hall, the audience clamored for more, and Rava returned with Guidi and Petrella alone, for a tender trio version of "My Funny Valentine," evoking the spirit of Chet Baker, whose impact on Italian jazz and personally on Rava is impossible to overestimate. Petrella blew long, buttery notes while Guidi rambled on the keyboard around the familiar changes, keeping all nostalgic feelings away.

A fitting conclusion for a glorious evening. At 80, Rava keeps exploring.