Enrico Pieranunzi: As Never Before & Yellow and Blue Suites

By STUART BROOMER
October 26, 2008
Sign in to view read count
Among pianists working in the harmonic tradition of the late Bill Evans, Enrico Pieranunzi has achieved a rare individuality, bringing unrivaled senses of line and sheer sonority to the style. Along with the advanced harmonic language, the Italian pianist belongs to a native bel canto tradition that extends to classical pianists as brilliant as Arturo Benedetti Michelangeli and Maurizio Pollini and film composers like Nino Rota and Enrico Morricone. As leader of the Space Jazz Trio in the 1970s, he worked with some of the most lyrical musicians in jazz, including trumpeter Chet Baker and saxophonist Lee Konitz and that too has contributed to his ability to be at once spare and rhapsodic. 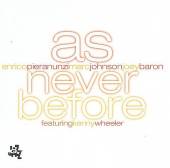 As Never Before unites Pieranunzi with one of the musicians he most admires, trumpeter Kenny Wheeler, and a rhythm section with which he's worked frequently, bassist Marc Johnson and drummer Joey Baron. The compositions are all Pieranunzi's—except for two collective improvisations—and they're a perfect fit for Wheeler, as closely matched to his lines as his own pieces might be. Pieranunzi's vehicles can at once lend themselves to a host of moods. Often a surge of energy from one player will break through a certain somber or pensive moment, or a sudden aside may clarify and collect a host of relationships. It's a command of architecture coupled with an awareness of each instant's potential exchange that unites the four musicians, creating an energy and drive rarely glimpsed in the lyric tradition to which they belong. On pieces like "Soundings" and "Many Moons Ago," Pieranunzi plays with a force and authority that carry his lines into fresh harmonic and rhythmic terrain. The result is undoubtedly one of the most beautiful recordings of the year. 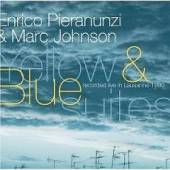 The special relationship between Pieranunzi and Johnson comes to the fore on Yellow and Blue Suites, a live 1990 recording from Lausanne, Switzerland that has been released on CD for the first time. At times Johnson acts as accompanist, pressing his lines so closely to Pieranunzi's that the bass seems to merge with the piano, but always adding a special rhythmic spring. At other times, the bassist's lines dart out into soulful or kinetic leads. There's something slightly miraculous in Pieranunzi's playing, an alchemical balance between the limpid and the resilient, whether he's exploring the slower, minor-keyed "Singing All the Time," building to the cascading scalar runs of "Je Ne Sais Quoi" or exploring a host of tempos in the sparkling "I Hear a Rhapsody". The clarity of execution consistently mirrors the clarity of Pieranunzi's thought.

Tracks: Soundings; Improheart; A Nameless Gate; As Never Before; Many Moons Ago; Impromind; Song for Kenny; Time's Passage; Winter Moon.