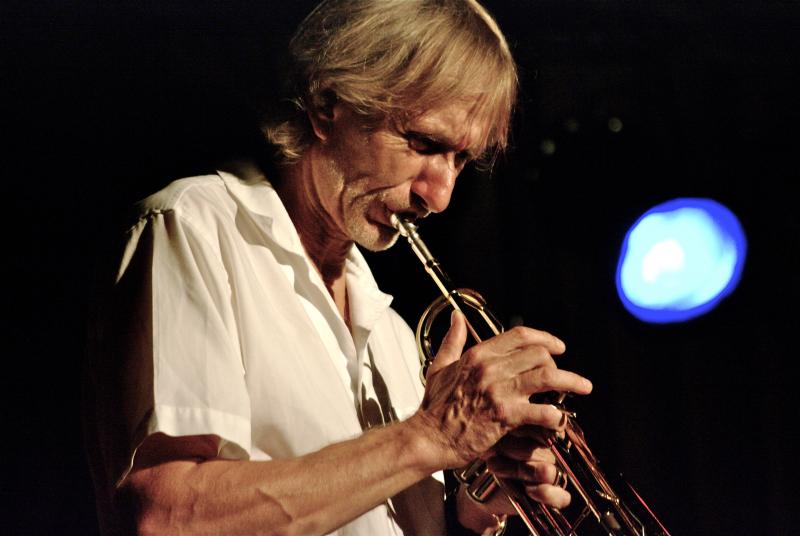 Enjoy Jazz Festival
Heidelberg/Mannheim/Ludwigshafen, Germany
October 2-November 18, 2011
On the first gala night, in the mediaeval Heidelberg Castle, trumpeter Erik Truffaz came out from beyond a red velvet curtain to deliver his tribute to Miles Davis, a good forty years after the release of Bitches Brew (Columbia, 1970) and only a few days after the 20th anniversary of the iconic trumpeter's death. In white shirt, Truffaz lowered his head towards his instrument and, as he began with "Orange Lady," he begged the question—as always, with a new interpretation—what is different and what will be the same. The dusty tones of the trumpet fell into the soft curves of the piece, covering it with a powder voile, a Lady that has crossed the centuries to join in a solemn walk. The rhythm took on implosive hits and broken beats, coming to rest in a last reflexive sigh.
As "Bitches Brew" took off, the first impression was one of complete amazement at the actuality of the track. "Bitches Brew" is the piece where Truffaz and Davis met, as if the younger trumpeter was joining those legendary musicians who stirred the brew decades ago, just to bring in a touch of velvet and to add softer grain to the track's grainy texture.

Davis' presence was paradoxically most pregnant in the rounded contours of Truffaz's performance, moving from contemplative monologues to the homogenous grooves and complex polyphonies of Joe Zawinul's "Pharaoh's Dance," bringing with it a new revelation. This must be what Davis had in mind when he gave the musicians only the beats and the bits: the magical brew made of fresh ingredients; a concoction still bubbling high after being re-seasoned with a pinch of harmony. The keyboards played guitar, Truffaz was sampling, and, towards the end of the first part when, as if by accident, he discovered his instrument on a speaker and played the final tones, the realization came that what was different and new in this concert was, again, Miles Davis himself. Truffaz managed to give his tribute to Davis the revelation of yet another of his inexhaustible hypostases. 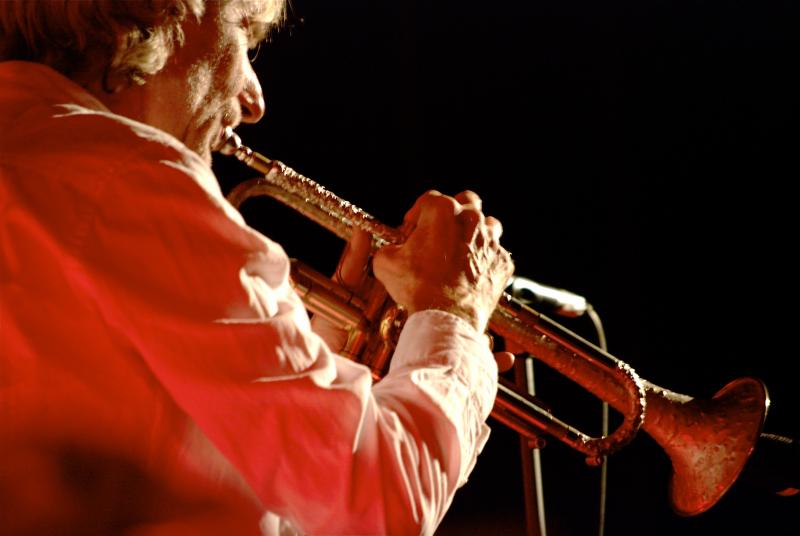 The first exponents of the festival's British jazz series opened with a harmonious bass and drum dialogue from Tom Mason and Richard Spaven respecively, backing Robert Mitchell's fading piano tones, which lingered for what seemed like dreamy minutes—a cover of electronic a artist Aphex Twin's "Alberto Balsam." Most of titles on Mitchell's most recent 3io album, The Embrace (3io, 2011), mingle swing with morphings into free jazz, all touched from the distance to give a first hint of what may be termed as "upgraded classical jazz." With Third Stream's "4Heroes," the trio played a self-contained, cerebral number that hinted to the inner force and balance, which came to full expression in its version of Massive Attack's "Teardrop." 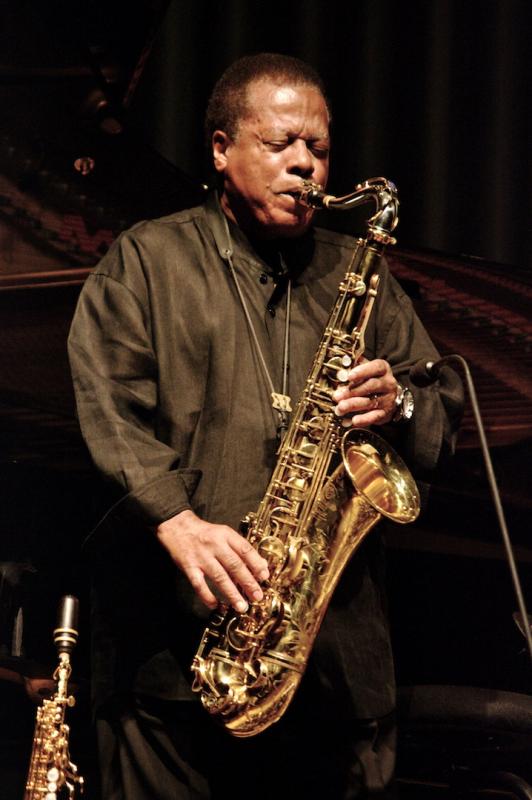 Like always, when witnessing the performance of a living legend, the first thought is, what can be still said about a musician whose name is synonymous with jazz itself, and whose life is part of the most exciting segment of the genre's history? What has been left unsaid when critics have been writing of him for more than 50 years? Nothing—or, at least, nothing essential. It's now possible to lay back, enjoy and share perceptions—which seemed to be exactly what the Wayne Shorter Quartet was doing on the stage.

Experiencing the saxophonist with his quartet is like joining in a game that goes on for more than a decade, becoming part of the music as if it were created in the moment, in a playful and effortless togetherness.

As Shorter walked onstage, it was impossible not to recall that this is the man who was part of Bitches Brew and Weather Report, the man who wrote "Sanctuary" and "Nefertiti." With economy of gesture and mimic, Shorter stood in front of the audience, ready to open a new chamber of perception, where rhythm and sound emerged and returned to the harmonic canvas in a complex balance.

Titles were really not important because each track was being reinvented again as it poured out. The parts merge and separate, Danilo Pérez's piano floating on the jocund vibrations of John Patitucci's bass marked by drummer Brian Blade's downbeats. With Shorter playing more soprano than tenor the quartet broke down into solo, duo and trio combinations until the leader's direct, vigorous tones united them again in that subtle harmony which makes the essence of all music.

The concert itself lasted one and a half hour, with just six pieces including encores, but Shorter's memorable music will remains in the memory for some time to come.

The second installment of the emerging British jazz featured this year, Troyka, brought a mixture of pop, electro and funk that, due to the combination of instruments—guitarist Chris Montague, organist Kit Downes and drummer Joshua Blackmore—gained an acutely contemporary quality of sound, employing electronic gadgets and games. The result was a dense amalgam with rough contours and sharp corners, out of which clear lines and straight tones surfaced at intervals. In "Born in the Eighties," a representative track from Troika (Harder Sound, 2009), the augmenting repetition, alternating with narrative segments, created a cyclical balance that united raw discontinuities with blue passages of tenderness, resulting in a nervous and assertive performance. 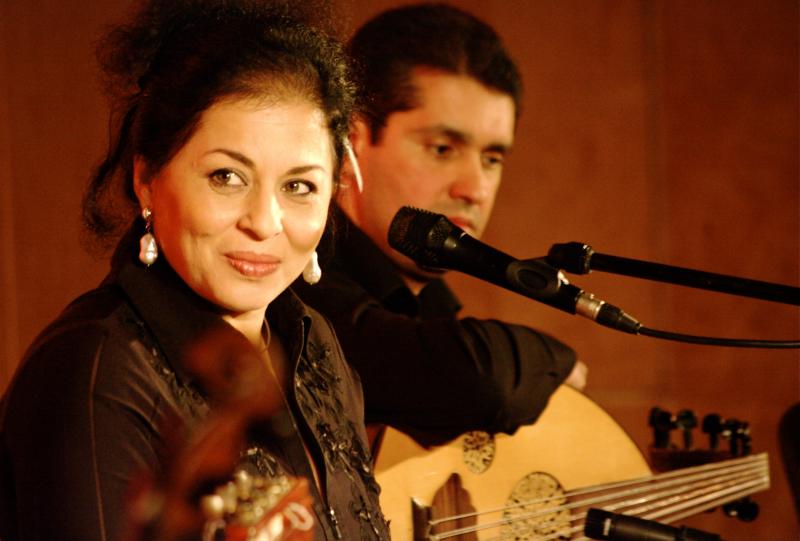 
A singer of tender and finely nuanced texture, Alaoui's voice became a presence that filled the room like a summer breeze in the Andalusian hills, like a clear spring flowing past the rocks. The evening was a quiet exploration of a musical space that spreads from Arabic folklore to the Spanish Flamenco and the Portuguese Fado, celebrated in the nostalgic chant of old ballads and lively Moroccan rhythms.