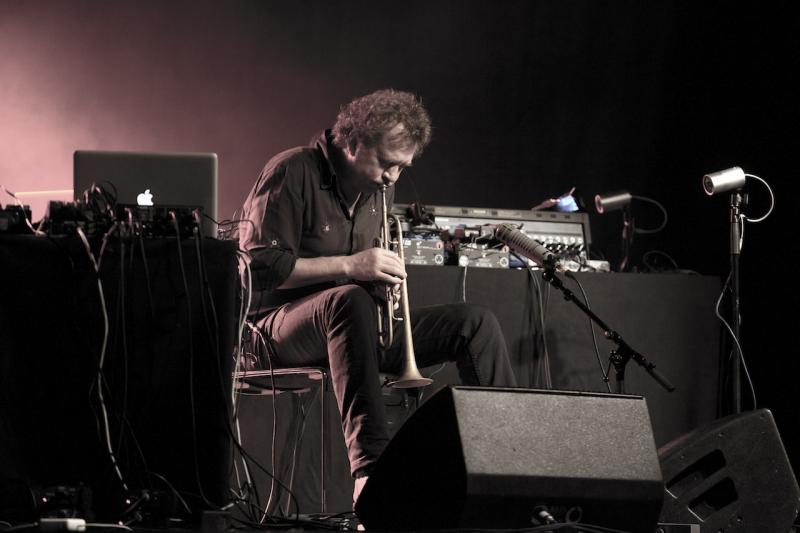 Enjoy Jazz is an event that can be attended in its entirety only by the lucky residents of the metropolitan area located in the Rhine-Neckar Triangle—and that for the simple reason that it runs for seven weeks. The good news is that all through the month of October and most of November, any weekend spent in the three locations—Heidelberg, Mannheim or Ludwigshafen—would make up for the loss through the finely tuned variety and the freshness of the visited shows. The Enjoy Jazz Festival was launched in full force 15 years ago and has continued to grow ever since, becoming one of Europe's best addresses for "Jazz and Other Things."

Tigran Hamasyan, at pianos and percussion, was joined by his Band Red Hail—Areni doing vocals, Sam Minaie on bass, Charles Altura on guitar, and Arthur Hiatek, drums—in a show that began like the eruption of a volcano. After the piano's intro, reminding one of rain's long fingers sliding down the window, a compact sonic mass started carrying away mixed measures with vibrant accents, grave breaks and dramatic rhythm alternances led by the steady progression of the voice. A playful interaction of the piano's spectacular pitch plunges, with the well sustained bass/drums structure, moved into an urgent sonic conglomeration with dodecaphonic heights.

The voice, perfectly integrated in the sound texture at first, acquired mediaeval inflections oscillating between sweet diminuendos and keen attacks on the note, while the piano-bass tension was reaching symphonic solemnity. A melodious folk song was followed by a ballad, where the lyrical preamble was segmented into a solemn cadence, unified by the ample phrasing which rounded the rhythmical edges.

The archaic hints were decomposed by the long guitar tones with atonal descents augmented into impetuous symphonic sequences, and jazzified by mixed bars and counterpoint attacks. In the final Georgian folk song, the grave accents rendered by the voice duo of Hamasyan and Areni moved from the gentle chant into an all-engulfing invocation fueled by the dramatic Slavic spirit.

Three men are sitting in a darkened scene, two of them behind large desks, one in front with his trumpet. He raises the trumpet to his lips and the sound emerges as from the depths of consciousness, invoking ancient myths and legends. Gradually the electronic sound awakens with a subdued pressure that glides into the present just to depart again into the timeless space of rites. The obsessive electro-beat controls the mood, the trumpet does the dreaming.

Nils Petter Molvaer & Moritz von Oswald, with Laurens von Oswald live mixing, brought to the Alte Feuerwache in Mannheim a forceful show of implosive dynamics that oscillated between the crudeness of primary pulsing and the segmental concreteness of the club beat. The high-powered electronic congress was at times receding into rhythmical pulsations just to allow the re-emerging of the trumpet in elegant sound arches, voice loops and theme quotes.

The multi-layered, almost tactile quality of the texture created sound platforms and corridors out of which the minimalistic inserts and whips of trumpet sound were pushing the groove into a engulfing rhythm frenzy reminiscent of ritual dances. The immediate sonic impact of the performance, based on Molvaer and Oswald's recently released album 1/1, was tremendously increased by the inner dynamics of instrumental mastery and inspired creativity at work.

At the end of an electrifying show, Nils Petter Molvaer returned for a solo and brought to the dark hall a light summer morning with dewy meadows reflecting the new sun, scintillating silver spider webs flying in the cool air, vibrating with the energy of a new beginning.

A production of Enjoy Jazz Director's Rainer Kern, the trio—Jan Bang, doing live sampling, Claus Boesser-Ferrari on guitar, and Sava Stoianov, trumpet—circumscribed the acoustic domain by integrating dissipated crumbs of sound into the rich rhythmic canopy created by Jan Bang's consummate sampling. An assiduous exploration on the sound valence on the trumpet, taken over by harsh riffs on the guitar, were prolonged into the abstract by the sampling, just to return as rustles of old leaves, sharp gusts of wind, forgotten pan-pipe sighs and bird songs.

The feed-backed balance plunged into an abysmal conglomerate, filtered again by the subtle sound processing. The trumpet and the guitar united in angular tonalities with balladic hints, aerial distances, long breaths and singular touches of strings, creating a segmented spatiality to be recomposed into exquisite murmurs and wails.

The arid plunges of the trumpet into Balkan themes with abrupt exits, backed by harsh guitar slaps culminating in a frenzy of sound, were met by exquisite electronic mastery rounding the edges, smoothing the abrasive textures, soothing the spirits.

Youn Sun Nah, visiting the festival for the third time, brought along the same ethereal freshness of voice, refined by the deepness of register and subtlety of pitch that define a fully accomplished artist today. The show started with Ulf Wakenius' homage to Ennio Moriccone and Egberto Gismonti in a potpourri of virtuous exactness and emotional refinement of expression. "Hurt," a piece from the recently released album Lento, sung in airy intervals and strong adagios that gradually diminished in whispers, installed the serene mystery that enfolds the vocalist's shows.

Wakenius' "Momento Magico" revealed the full measure of vocal and instrumental complexity of the two artists. The alternation of ascending ska successions with lyrical modulation and high-pitched opera hints, were augmented by fluid guitar riffs which gave the performance new and unexpected depths. The voice improvisation, merging together jazz techniques with Korean tones and vibrant blues phrasing, built a beautifully tensioned musical arch of incredible ambitus that ranged all the way from deep breath to crystal-clear high singing.

On the wailing cadence of "Lament," the voice grew into an intense cry of liberation to be followed immediately by the suave inflections of "Arirang"—a piece described by the artist as "Korean blues"—sung with clear tinges of angelic repose. "Same Girl" closed a show of deeply felt musicality where grace met passion. Same girl but always new.

Anouar Brahem's show closed the festival with tunes of gentle firmness, drawing their self-inductive serenity from the essence of the Oriental spirit. The vibrant sounds of the quartet—Khaled Yassine, darbouka, bendir; Bjoern Meyer, bass; and Klaus Gessing, bass clarinet—commingled jazz metrics with Tunisian hues and undulated into a harmony that, spirited by the inner breath like a pneuma, acquired airy harp inflections.

The oud was carrying a rueful melody of yearning, love and sorrow, pure and passionate at the same time. The bass clarinet's lingering clusters of sound called forth the soothing tenderness of the wind gently blowing away the grains of sand in golden swirls. The reverberating rhythmicity of the bass/percussion section in harmonic conjunction with its quiet vibes created a fluid sonic frame for the moving accents of the oud, which was returning to the first note as to a pole of dreaminess.

Anouar Brahem brought to the Evangelic Church of Mannheim the gentle floating of the desert breeze, the calm dips of the dunes, and the tender roundness of the waves, in a show that was reaching across cultures and beliefs to unite in the pure joy of music.

The graceful swings of dance and the soft echoes of sound lingered in the German dome long after the show was over, like the steady sway of a departing caravan.

After a short guitar intro, Lizz Wright came onstage dressed in red and barefoot, like an ancient goddess of song. Her deep, dark voice carrying a long history of love and suffering, of joy and oppression, started flowing majestically like a river that passes the waters of time. The rich texture and the dramatic inflections were enhanced by the warm smoothness of tone, reminding of a velvet scarf sliding upon bare ground.

The band—Nicholas D'Amato, e-bass; Robin Macatangay, guitar; Marvin Sewell, guitar; and Brannen Temple, drums—sustaining a discreet transition of moods, from rock innuendos with percussion inserts to the quiet inflections of soft ballads and chants—offered the perfect backdrop for a sensuous show that moved on with the naturalness of a walk on the beach at dusk.

Gregory Porter's show started with a blast of musical energy and moved along on a tempestuous mingling of perfectly attuned modes. His voice, with deeply harmonic lining, and fuelled by vibrant inner propulsion, glided on the intervals with the kind of newness that made each theme sound like an improvisation.

The quartet—Chip Crawford, piano; Aaron James, bass; Yoshuke Saton, sax; and Emanuel Harrold, drums—gave a solid backing, moving along at the same time with a clear, distinct voice. Saton's nervous sax solos, with pertinent and sharply modulated pitch plunges, commented on the theme while the drum work was expanding its impact. The bass augmented the expression, and the piano highlighted the lyrical undercurrent.

The sinuous narrative of Porter's voice, meandering around the melodic pattern with an exquisite command of pitch and tone, and in perfect balance with the group's well tensioned act, gave a show of superlatives with a hint of soul, a touch of funk, a pinch of blues.