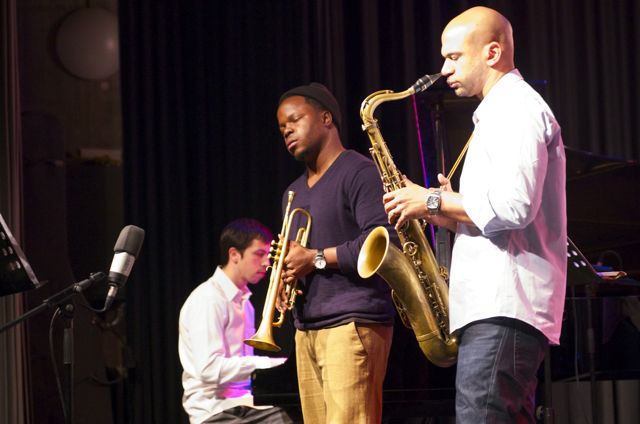 The humorous dialogue between tubaist Michel Godard's grave tones and legendary German drummer Gunter Baby Sommer became the leading note of the evening in Karlstorbahnhof (Carol's Door), a well-attended Heidelberg club. The pairing of tuba and drums, as well as that of serpent with spectacular percussion (drumming with towels and cymbals played on the head) gave the performance an alertness and lyrical hue that made the absence of chords almost unnoticeable. The tuba's dusty tones, diminishing in stray sighs, were complemented by velvety melodies on the serpent, which recalled old folk tunes. Strong drum accents sustained by voice evolved into hymns and long forgotten rites.

Right from the onset, trumpeter Ambrose Akinmusire's quintet—also featuring tenor saxophonist Walter Smith III, pianist Sam Harris, bassist Harish Raghavan and drummer Justin Brown—started rolling in perfect cohesion, like a sonic mill. The dense, intelligent performance of the brass was augmented by the sustained tension brought in from the rhythmic section. Complex harmonic structures provided a constant sonic backdrop from which melodic lines emerged, like trains rushing through a sound tunnel. Densely meshed into the alert polyphony, instrumental lines surfaced from the melodious undercurrent in nervous solos. Akinmusire's high cries mingled with softer tones ebbed into abstract sonorities. His ascending dialogue with Smith brought in a refreshing effect. Brown's dynamic precision moved like a rolling wave upon which Harris' adagios, with classical undertones, wrapped the music in a tender veil.

Most of the titles played by this sextet, founded in 2006 by brothers Kuba and Bartek Kapsa—on piano and drums, respectively—belonged to Ghostwriter's Joke (Denovali, 2011). Alternating moods and textures, the band put forth a massive performance with spectacular arcs of tension, ranging from minimalism to solemn developments, and from groove to experiment. The balanced interaction of the trumpeter Wojtek Jachna and saxophonist Ireneusz Wojtczak was excellently sustained by bassist Anton Olszewski and the Kapsa brothers. Guitarist Kamil Pater's energetic intercessions alternated deconstructive escalations with melodious shifts, doing justice to the phrase often used to describe this sextet's music: film music without films.

Berit Opheim Versto, Anna Maria Friman and Linn Andrea Fuglseth are the three vocalists who, together with trumpter Arve Henriksen, have opened the door to a departed world to let in pure flows of nostalgia. Combining Norwegian folksongs with Gregorian polyphonies, the quartet brought a touch of Christmas and a hue of secret incantation to the elegant Ludwigshafen music chamber. The gracious blending of the voices became a sonic channel leading back to long-cherished traditions. Harmonically complementary, Henriksens' explorations on trumpet, cornet, and keyboard created a perfect instrumental pendant. His well-placed trumpet interventions, and a voice in suave chant or overtones, enhanced the spiritual dimension of the performance while his sampling rendered it spatiality.

Madeleine Peyroux' voice alternated dark textures with a well-controlled lyricism: a cutting edge, a tinge of irony, a hint of drama with a sensual touch. Excellently sustained by the quiet drive of her combo—guitarist Jon Herington, keyboardist Gary Versace, bassist Barak Mori and drummer Darren Beckett—the vocalist delivered a meaty performance, spectacularly alternating styles, ranging from bossa nova to blues, from French chanson to boogie, and leading all the way back to traditional jazz scores. Her skillful phrasing, combined with an excellent sense of timing, set the tunes in a new emotional context which, by now, could be described as "the Peyroux mood." Her vocal modulations unfolded from sheer narrative to the lightly atonal—even abstract mannerisms. The richly nuancing and subdued energy of "This is Heaven to Me"—a gracious closing tribute to singer Billie Holiday—lingered in the air long after the lights went off.

This show, featuring music from drummer Billy Hart's recent All Our Reasons (ECM, 2012), was an absolute festival highlight. Conceived as a developing narrative with subtly tensioned sequels, the evening started with an eruption of bubbling energy, the red thread of swing leading all the way to the exact point of fusion between instrumental mastery and musical synergy. Hart's tremendous presence contributed a virtuoso act of stunning complexity, perfectly integrated in the foamy performance. Hart's dynamic accord with bassist Ben Street's nuanced modulations completed the rhythmical scheme of counterpoints and mixed measures. Saxophonist Mark Turner's sovereign alternation of moods found its counterpart in pianist Ethan Iverson's firm grip. In perfect communion and synchronicity, the musicians brought a show reminiscent of a high-powered engine, a drive on the edge of a precipice, a stormy wind upon a ripe cornfield, or a river carrying along the changes of time.

It took festival director, Rainer Kern six month of logistical coordination to bring together these five high-ranking musicians for this historic festival closer. When the musicians stepped onstage and sat at their instruments, and the audience overcame the emotion, there was a moment of silence—a moment of concentration that quietly anticipated a rare event where, in the end, musicians and audience were rendered as members of a big family. The performance was marked throughout by a powerful emotional flow, which actually enhanced the music's concept and harmonic completeness. The calm, almost hieratic balance was elegantly transported by the serene, undemonstrative manner of interpretation.

In saxophonist Archie Shepp's "Major 3rds and Minor 2nds," the instruments' solitary tones gradually took over Yusef Lateef's flute line to further gel into a melodic thread. The strong rhythmical binder was provided by bassist Reggie Workman and drummer Hamid Drake. While its theme glided from one instrument to the other in "Une petite surprise pour Mam'zelle," the swing provided a sonic environment fueled incessantly by its inner drive, transforming the performance into a transporting experience.

Lateef's finesse and stylistic elegance was graciously paired with Shepp's tender tones. "Listen with the Heart" started with ethereal flute tones mingling with soft wailing and cries of dying birds—a composite of sound best contextualized by the bass intervals, out of which Shepp emerged, retrieving melodious signals interrupted by wild calls. Sung by Lateef with a youthful, ethereal voice, "Brother Hold Your Line" best revealed the spirituality of his musical being. Just as in his instrumental performance, time seemed to have rounded the edges, giving his music a heightened quality. The show closed with a blues, a fair pairing of forces at work, and a superb twining of voices best sustained by the fluid perfection of pianist Mulgrew Miller's descending phrases. The groove emerging in an organic crescendo, culminating in a serene dance of the titans.