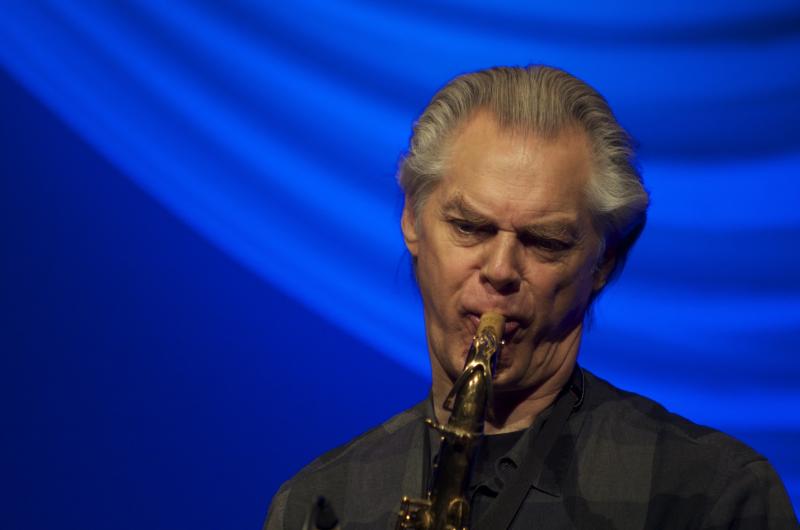 By ADRIANA CARCU
November 3, 2012
Sign in to view read count
Enjoy Jazz 2012
Heidelberg / Mannheim / Ludwigshafen, Germany
October 2-November 10, 2012
Expressed in numbers, the 14th edition of Enjoy Jazz, advertized as a "Festival for Jazz and Other Things," brings up an impressive count: 59 concerts performed in 32 locations, with 265 musicians from 24 countries. Put into words the numbers reveal a most festive setup and a wide diversity of choice. These are the true brands of a major European jazz event happening at the crossroad of three German counties. That alone may stand symbolically for the illustrious lineup featured in this edition. Jazz legends like drummer Jack DeJohnette, pianist Herbie Hancock, drummer Billy Hart, guitarist Elliot Sharp, saxophonist Archie Shepp and reed/woodwind multi-instrumentalist Yusef Lateef are performing in three galas.

Jack DeJohnette's, sovereign drum performance-skillfully complemented by Rudresh Mahanthappa's arid saxophone tones, joined by guitarist David Fiuczynski, keyboardist/trumpeter George Colligan and bassist Jerome Harris-opened the festival with a showcase of superlatives. "Tango African" started with an ancient drum call anticipating the theme, which unfolded in an ascending drum/sax dialogue, pointed by piercing free accents and seconded by minimalistic keyboard pulses, which lent the performance an atonal spatiality. In "Blue," as if illustrating John Keats' incentive-"Load every rift with ore"-the melody played on drums enveloped the controlled austerity of the soundscape like a velvet curtain. "Ahmad, the Terrible" started with a homogenous sound carried by the guitar's smooth sequential touches. The melodiousness of the bass, paired by the knotty harmonies of the sax, was enhanced rhythmically by the DeJohnette's elegant versatility in dominating from the background. In "One for Eric," as if exchanging traditional roles, the rhythm section provided the melody while Mahanthappa's masculine attacks combined with Colligan's firm presence on piano, tore at the sound curtain. The group's compact yet airy performance provided a complex musical experience that stood firm for the meaning of contemporary jazz.

As if to reinforce the festival's credo of openness, pianist Bugge Wesseltoft joined with classical violinist {Henning Kraggerud for an acoustic duo project that provided new insights into the musicians' multifaceted creativity. Last Spring (ACT, 2012) is the name of the duo's debut recording and the autumn concert performed in Heidelbeg's Church of the Holy Spirit-a concert that had the diaphanous quality of a winter minuet. Based mainly on original Norwegian folksongs and on the music of classical composer Edvard Grieg, the performance was defined by a quiet lyricism, expressed in natural harmonies with elaborate melodic sequences climaxing in pathetic adagios. Kraggerud's suave sound soared like a solitary bird above Wesseltoft's serene explorations, fluctuating in and out of the classical soundscape in full command of the emotional timing. Wesseltoft's performance unfolded in a well-tempered succession of moods, moving from reflexive contemplation to well-sustained narrative progression. The isolated drops of sound that heightened the lightness of the performance acquired hymnal crescendos, at times reaching tourbillon-like intensity, ultimately abating into calm remises that died away like the remote whispers of a dark Norwegian forest.

The performance brought to the Old Firehouse in Mannheim by Norwegian musician/producer Jan Bang and Armenian pianist Tigran Hamasyan was a world premiere. It was the first time that the two musicians had met and played together. Their set, the only one performed in Germany, was flooded with inner musicality and had the special quality improvisation always requires from musicians and audience alike: one has to put something into it in order to get something out of it.

What the two musicians put into the act were the sounds coming from the remote Armenian mountain, which, floating like petals falling to the ground in the morning breeze, were decomposed by Bang's sampler into solitary peaks, and transported to the Norwegian plains by ancestral voices. The crystal clear attack of the keys brought the sound into a more abstract dimension, augmenting with an internal combustion that developed from minimalist progressions into harmonic ramifications of choral solemnity. Solitary melodies, accompanied by Hamasyan's voice, were transformed by feedback into an emerging and receding sea of sounds that gradually metamorphosed from water into ice. Bang's large gestures, combined with Hamasyan's percussive piano chords, lending the whole performance a ritual grandeur.

Pianist Benedikt Jahnel has played before at Enjoy Jazz Festival, as part of the jazz and Persian lyric band, Cyminology. This time, together with Canadian drummer Owen Howard and Spanish bassist Antonio Miguel, his trio brought a strong performance of fusing energy and impressive stylistic diversity to Mannheim's Klapsmuehle (Loony Bin) club. It was a real revelation; coagulating around rhythmical modules, the melodic units (e)merged into an all-engulfing sonic front that carried with it light and sound, pouring back into a theme with the smoothness of clouds clearing the sky after a summer tempest. 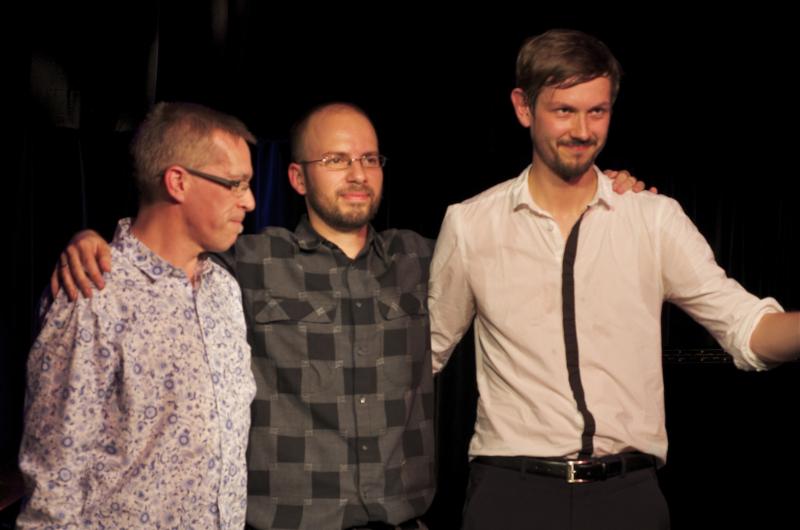 The trio's new album, Equilibrium (ECM 2012), mixes pearly melodic successions with counterpointed cadences, and monochromatic agglutinations with intricate rhythmic structures, all in a frenzy of sound that, in concert, filled the room like a work of musical architecture in which it's appealing to dwell for a long while.

This performance was part of the five-year anniversary tour of Erased Tapes, a label located in London and Berlin that mainly promotes contemporary classical music-a border gender that aims to maintain an equidistant position to acoustic and electronic (or digital) music, whilst integrating classical music with folk-based themes and improvisation. Together, the three sets combined in a fluid performance that combined classical undertones with a more vivid soundtrack of engulfing intensity.

Beyond guitarist/keyboardist Adam Wiltzie}} and keyboardist/string player Dustin O´Halloran, A Winged Victory For the Sullen's performance featured, at times, the whole ensemble united in intense vibratos, putting haunting tunes in the room and allowing them to linger for a while before returning to silence. Pianist Ólafur Arnalds's solo integrated classical composer Arvo Part's tones of subdued suffering with sampled inserts of audience-sampled chorals, mixing gothic cadences with nocturnal meditation in a post-modern version of The New Vintage Big Band. Pianist/strings player Nils Frahm featured guest vocalist Anne Müller, starting his set with a percussion attack on piano chords that, amplified by monotone minimalism, grew menacingly until the harmony burst out with the impact of a verdict to further dissolve into pure lyricism. A two-piano number, together with Arnalds, augmented the obsessive beat of keys into acute conjunctions of sound and rhythm, which then diminished in concentric waves dispersing in a continuous flow.

The encore, performed by the whole ensemble, departed in ascending harmonies like a ride to the end of the night.

A rainy autumn evening. A dark coffee bar in Mannheim called Café Prag. On the raw walls huge photographs featured opulently dressed models. A girl in corduroy jeans sat, cross-legged, on a makeshift stage and played with a sound box. The sounds coming out of the box were samples and loops of her own voice, and built, layer-upon-layer, into a soundscape that gradually revealed candid incantations, tender ballads of the fjords, and ancestral cries of scared birds, spiced with distant oriental vibes. Brunvoll''s processed voice emerged from the primal magma, boiling with electric intermittences, mixing tender melodies with high atonal calls, her playful kalimba sound alternating with tongue and lips-driven percussion. Gradually the lyricism became drama, and the long wailing tones turned into rhythmical bursts, the short breath of a scared child metamorphosing into acute confrontations with itself and the world. Brunvoll's performance was slightly bemusing, but would have benefited from a greater vocal presence.

The air of joyful anticipation dominating the lobby-a clear sign of growing popularity-seemed to contaminate saxophonist Jan Garbarek's quartet featuring Trilok Gurtu-who, together with pianist Rainer Bruninghaus and bassist Yuri Daniel-gave a most gratifying performance. Just like things happen when two old friends meet and share old experiences, the music played was an inspired medley, bringing together the aloof nostalgic tones of the North with the natural voices of tabla and the harpsichord tonalities of the piano. Hymns of praise alternated with rhythmical tempests, melodious scores followed sophisticated classic innuendos when "It's High Time" followed "When the Rivers Meet." The sonic landscape had, in its center, a high cliff surrounded by turbulent rhythmical flows. The sound of Garbarek's saxophone rose in pensive tones like the morning sun, atomized into scintillating harmonies, progressing into vertical notes and contrasting shades, and then took a few rounds in the sunny afternoon and glided smoothly into the dusk.

Daniel escalated a theme in single steps that merged into melodic sequences with cello-like melodiousness, only to dissolve again into solitary peaks of sound. Bruninghaus deconstructed themes into minute atonalities, only to reintegrate them into the tabla's modulating harmony. The rhythmic conglomerate became a self-propelled sonic substance that moved gradually into a more abstract territory, where sound fell naturally upon sound, and music became a state of being with no direct relation to its source material.