Nicole Mitchell: Engraved In The Wind 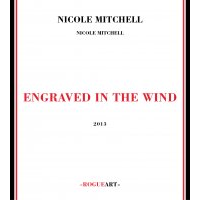 As a musician, flutist Nicole Mitchell brooks no constraints to her artistry. Not content with large scale orchestral works, such as Arc of O (Rogue Art, 2012), small group interaction with her Indigo Trio and mid-sized ensembles exemplified by her Black Earth Ensemble on Three Compositions (Rogue Art, 2013), she now takes on the ultimate challenge for the single line instrumentalist: the solo album. Of course, it's a misnomer to suggest that Mitchell can only follow one tack at once, as her prowess with multiphonics created by simultaneously using her voice and flute means that she often evinces two or more concurrent lines which blur the distinction between larynx and instrument. However that's not to imply that technique scores at the expense of feeling as Mitchell also draws deeply upon her lyrical and soulful side.

Perhaps the pre-eminent flute stylist in contemporary jazz, Mitchell brings her compositional sensibility to bear on a program of sixteen mostly short cuts which examine a fascinating range of ideas. Interspersed among the largely extemporized pieces by Mitchell are five from the pens of others, written specially for this project. Adding further variety, and perhaps recognizing the task inherent in maintaining attention alone, Mitchell also utilizes over dubbing to provide her own counterpoint on four tracks. In this she recalls the experiments of one of her inspirations, James Newton who also multi-tracked his flute to stunning effect on Paseo Del Mar (India Navigation, 1979).

ADVERTISEMENT
Mitchell calls on Newton more directly, as he contributes a piece for her—the punchy "Six Wings" which alternates drawn out tones and skippy altissimo phrases. Of the other commissions, most notable are Mitchell's collaboration with Aaya Samaa on the singing "Dadwee" and Yung Wha Son's "Song of Suchness" where sustained microtonality give way first to spacious meditation and then joyous folkiness before a return to the opening gambit. Many of the tune titles allude to the natural world, and indeed there is an elemental quality which pervades Mitchell's performance, manifest clearly on the rippling "Blue Mountain," the zinging dissonances of "Beehive," and the excitable multiple chorus of the pleasing "High light at the Waterfall." While unaccompanied flute may not be for everyone, those with an interest in either Mitchell or the instrument will be richly rewarded.