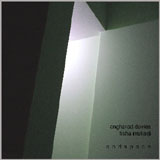 Endspace is the debut release for this duo. For some time, Angharad Davies and Tisha Mukarji have been two of the most distinctive young improvisers performing on the UK scene, but they have not been adequately represented on disc. This release starts to remedy the situation, and so is particularly welcome.

The combination of Davies' violin and Mukarij's inside piano—both entirely acoustic, but each with a range of preparations—qualifies as "chamber improv," but that term hardly does justice to the vibrancy of the music here.

The music is difficult to pigeonhole; although improvised, it goes beyond the normal borders of improv. Davies is comfortable producing sustained bowed patterns that give much of the music an underlying rhythmic feel, one that is enhanced by Mukarji's plucked punctuations. The latter are an object lesson in economy; Mukarji plays few notes and none of them is wasted, yet there is an irresistible logic to her playing. Above all else, the two players are highly compatible and communicate a shared understanding of what they wish to produce. The end results have a tranquility and beauty likely to appeal to listeners who would not normally consider improv.

The five pieces here have a combined playing time of under forty minutes. However, that is a strength more than a weakness. Their quality more than compensates for the quantity. Such is the sense of completeness provided by the pieces that any more would seem superfluous. This is one of those (rare) albums that when it finishes, one is hard pressed to think what to follow it with. More often than not, the solution is to simply play it again. And again.

A delight. We must hope that this duo records again soon.