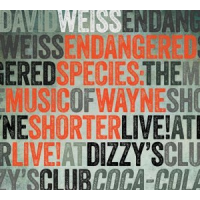 A solid entry in the ongoing resurgence of focus on Wayne Shorter's music, David Weiss' Endangered Species: The Music of Wayne Shorter is immediately notable for the all-star cast that comprises the 12-piece ensemble and the fact that it was recorded live, enabling the group to interact freely and deliver a potent mix of precision and vibrant energy.

Timed to coincide with Shorter's 80th birthday, the album samples music from the full range of Shorter's career, providing an overview of the legendary composers many contributions. Part homage and part experiment, the album's six selections provide a well-executed tour covering nearly 50 years of musical invention. Now, some may ask if it's necessary for anyone other than Shorter himself to be the tour guide, but the bottom line is Weiss delivers music bristling with big-band vitality. And in time-honored jazz tradition, the band's collective efforts transform the base material with the voice and vision of the individual players while honoring the original compositions' spirit. Though at times Weiss' restructuring seems to sacrifice some of Shorter's more esoteric, stratospheric departures, the end result is nonetheless engaging and enjoyable.

While all six of the album's tunes are expertly delivered, it is interesting that the above elements come together most potently on the album's last piece "Prometheus Unbound," one of Shorter's most recent compositions. Here, the band reaches a peak of interplay and each soloist seems pushed by the penetrating grooves to further heights, making for a finale that fittingly underscores Shorter's past prominence, contemporary relevance, and heralds his inevitable future as a continual point of reference.