By DAN MCCLENAGHAN
January 24, 2006
Sign in to view read count 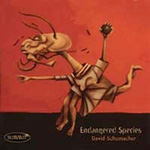 Back in the beginning there was Gerry Mulligan; or maybe it was Pepper Adams. We're talking baritone saxophone here, of course, especially as a lead instrument. It's still not a horn you often hear out front, regrettably. But with his Summit Records debut, Endangered Species, Dave Schumacher does his part to remedy the situation.

Schmacher, a veteran of more than two decades on the New York jazz scene, has explored the deep, dark end of the baritone's sound, including the grumbles and growls, in his work with Lionel Hampton, Tom Harrell and T.S. Monk. He also does so in the spotlight on this exceptionally fine effort.

The sound is mostly mainstream, but Schumacher proves himself quite the innovator. The disc opens with the "Too Tonal Free! Dumb!," 37 seconds of hip-hop-flavored from-the-gut baritone blowing backed by something called "improvised hip-hop e-drums." I don't know what those are—and I sense a contradiction in terms—but it sounds great: grouchy, ursine blowing in front a deep, bone-shaking beat.

The core sound of the disc is the organ trio fronted by Shumacher's baritone sax—a more unusual configuration than the baritone out front in whatever the enemble. It works wonderfully, the low notes of the horn punctuating the cool flow of the organ harmonies.

Schumacher waxes poetic on three numbers, quite literally. He recites his poetry, backed by some very hip-sounding tenor sax, and the baritone sax man has the perfect poet's voice—a sound not unlike his horn—a low timbre full of gravel. Another change of pace is Sequito's Too Tonal Free! Drum!," a bubbling cooker featuring Sequito Turner on an array of Latin percussion.

Endangered Species covers a lot of ground—Afro-Cuban, spoken word, organ group—but it maintains a nicely-paced, satisfying cohesion straight through, with the spoken word interludes sounding like a cool as hell beat poetry reading.