By MARK CORROTO
February 22, 2011
Sign in to view read count 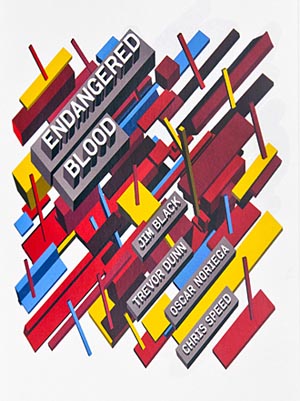 Black and Speed are both veterans of Tim Berne's vanguard band, Bloodcount, as well as Human Feel, Pachora, Yeah No and Alas No Axis. Dunn has been a member of Mr. Bungle and bands led by John Zorn, while Noriega is one of Berne's latest finds, and a longtime collaborator with Satoko Fujii.

The quartet's brief and intense tribute to D'Angelo, "Andrew's Ditty Variation One," begins with a two-horn lockstep sprint that quickly evolves into a time-shifting squawk-fest. With Black bashing out a barrage of beats, the two horns mimic D'Angelo's infamous raging sound that is often performed onstage, wriggling on his back.

But the disc is not at all about camp. The quartet draws together its many influences, from Eastern European to alt-rock, to push the boundaries of performance jazz. Speed is credited with the writing here, but he draws not only from his writing with The Clarinets and Human Feel, but his work in Black's Alas No Axis and drummer John Hollenbeck's The Claudia Quintet.

With Noriega doubling on bass clarinet, Speed is able to enlarge the sound on "Rare," and present Thelonious Monk's "Epistrophy" with a much darker tone, as if played by men in over-sized wool coats lifting heavy objects. "Tacos At Oscars" swirls some Philip Glass-style unison horns around Black's frenetic drumming. This recording's purpose becomes clear, however, on tracks like "Uri Bird," which melds funk and bebop, or "Iris," a New Orleans blues outfitted with an old-school sawed bass and parading horns.

Endangered Blood signals a sort of watershed in the evolution of creative music that was once called jazz. The dust has cleared, and what's left is an idiosyncratic and very entertaining sound.