By BUDD KOPMAN
September 6, 2007
Sign in to view read count 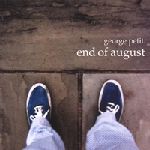 George Walker Petit is no stranger to jazz musicians since he is one of the top recording engineers in New York City. Although he has closed his own studio he remains active and has recorded many, many musicians. With ...End Of August, he has recorded himself.

What makes Petit a successful recording engineer is not only his deep knowledge of the process, but also the fact that he is a musician himself, and hence knows what live music sounds like. With ...End of August, he shows himself to be a sensitive composer and player, with an emotional honesty that really comes through.

The man really can play guitar (both acoustic finger style and electric) and flashes some chops here and there. Petit is also listed as playing electric bass, percussion, various keyboards, trumpet, vibes and vocals. Yet his main instrument is clearly guitar.

Even if one prefers a sound that is more "live," the record is crisp and clear and the mixing is expertly done, as one would expect. What is not lost, and this is telling, is that each instrument, from a solo acoustic guitar to a saxophone, sounds real, and there is no listening fatigue whatsoever.

Petit's influences are quite obvious and his soft spot is the music of Antonio Carlos Jobim and Joao Gilberto as heard on Benny Carter's "Only Trust Your Heart," a surprisingly affective "S'Wonderful" by George Gershwin and the lively originals "Bijou" and "Montreux." Other originals mine the jazz soul ballad ("Off Center"—with some killer playing) and bit of light funk ("Half Of What You Need").

Of particular interest are the two solo guitar tracks, "Stockbridge (lost)" and "On Any Given Night." The former has a country sound mixed with advanced harmonies that are quite touching, while the latter is a short, freely rhythmic love song that ends much too soon.

The arrangements are top notch and allow the other musicians, especially Justin Flynn on reeds and flute, to shine. Indeed the only complaint one could have is that the album is too short—its thirty-eight minutes fly by.

...End Of August is a very fine piece of work, no matter how one looks at it and one must laud Petit for his efforts in every aspect of its creation.

Only Trust Your Heart; Off Center; Stockbridge (lost); S'Wonderful; Half Of What You Need; Bijou; Montreux; On Any Given Night; Aldo (Forza Italia).