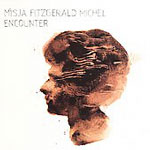 Misja Fitzgerald-Michel plays guitar with an illuminating brilliance. On his third studio album, the 32-year-old lights the way through eleven numbers: five originals plus compositions by Ornette Coleman and John Coltrane (two apiece), Wayne Shorter and Bill Stewart. That he chose no other guitarists' songs to cover says something about Fitzgerald-Michel's sense of exploration. He avoids the easy route.

The leader's trio with bassist Drew Gress and drummer Jochen Rueckert expands to a quartet on two numbers with the addition of tenor saxman Ravi Coltrane. Another measure of Fitzgerald-Michel's sense of quiet daring is having Coltrane play on songs not written by his father, and inviting him to start things off, with Coleman's busy, polytonal, polyrhythmic—poly-everything—"Chopin."

The piece develops like a sheep-herding dog trying feverishly to rein in his flock, only to be chased by the rambunctious sheep; Coltrane's meaty tenor is the frantic dog. Fitzgerald-Michel's rising and falling runs, first echoing the sax, following then chasing, make for some dazzling, acrobatic duets with Coltrane. Gress and Rueckert join the fray as equals, sometimes running with the sheep, sometimes with the dog.

Fitzgerald-Michel's five compositions defy categorization, though his modern jazz roots run deep. In the French classical tradition, his music lies just behind a scrim. He hints at melody in two studies of serenity, "Another World and "Mirage, embracing harmonies that coalesce and quickly diverge. Gress and Rueckert ground the tunes with rhythms that can also wander freely. On "Mirage, Fitzgerald-Michel's spidery chords and single notes complement Rueckert's delicate brushwork, while Gress's bass bubbles gently underneath. I'm tempted to call this music lush, but its crystalline clarity suggests otherwise.

Listeners curious about Fitzgerald-Michel's musical pedigree will hear echoes of his mentor, Jim Hall, as well as Wes Montgomery, Russell Malone, and in his lightning runs on Coltrane's "Countdown (a Jackson Pollock painting for the ears), Tal Farlow. Fitzgerald-Michel's mastery of composition and arranging spring from the emotional freshness he brings to the music.

His arrangements resonate with possibility. On Wayne Shorter's "Limbo, the set's longest number at 6:30, Fitzgerald-Michel plays with a nuanced, gracious authority, creating beautiful, lyrical ideas that yield to Gress's catapulting, growling bass and Rueckert's tasteful, declarative bursts on the snare. With just two solo tunes, one a 51-second flurry that evokes Yes's Steve Howe, Fitzgerald-Michel demonstrates his fealty to the ensemble.

Chopin; What For?; Boundless; Mirage; Another World; Lonely Woman; Think Before You Think; Countdown; The Gathering; Limbo; Central Park West.