By DAN BILAWSKY
December 11, 2011
Sign in to view read count 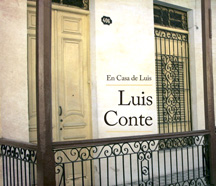 Luis Conte may not be a household name, but anybody with access to music in the past thirty years has probably heard his playing. Conte has served as the percussion colorist of choice for the musical elite and, with appearances on hundreds of albums that touch on virtually every genre, from jazz to pop to film scores to Latin music and beyond, his playing has become the rhythmic undercurrent on the soundtrack of our lives. While Conte remains a first-call musician who is frequently summoned for studio sessions, touring, and television work, he managed to carve out some time to lay down the eleven songs that make up this percussive portrait.

Conte frequently works in the cracks or crevices of a song, but this music places him front and center. His creativity, virtuosity, and musical flexibility come to the forefront as he uses dozens of different instruments to achieve his artistic vision. A jam-like vibe surrounds certain performances ("En Casa De Luis" and "El Rumbero Mas Chevere"), while others have a more polished outlook, but Conte also sculpts songs that have a worldly visage. A pan-global, tropical flavored number that gives Conte a chance to cover the whole instrumental gamut, including bass, accordion, congas, and keyboards ("Conga Melody"), and the African-leaning "Eden" are two notable examples.

Stylistic continuity is ultimately less of a concern to Conte than the art of creation, whether spontaneous or premeditated, with family and friends. The Conte clan joins the leader, adding ambience to the album opener and hand claps to "Conga Melody," pianist Larry Goldings makes an appearance on his own breezy "Dance Of The Firefly," trumpeter Walt Fowler adds his own inimitable horn work to the proceedings, and bassist Jimmy Johnson makes a few appearances throughout the album. While an ever-changing cast of characters helps Conte out, guitarist Barry Coates proves to be the most important of them all. His ability to color the music and shape the overall sound of each song makes him an indispensable entity on this outing.

While Conte's own music isn't likely to garner the same size audience as that of his many high-visibility employers, that's irrelevant. En Casa De Luis lives and breathes with the uncontainable passion and curiosity of a percussion legend doing what he does best, and that's all that matters.