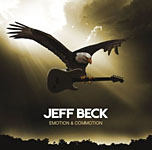 Jeff Beck's Emotion & Commotion is designed to nurture the guitarist's growing visibility of the last ten years, and may well serve that purpose, even if it only scratches the surface of his genius.

The presence of orchestration on many of these tracks is admirable for its ambition, but is not a novel concept within Beck's discography. The Beatles' producer George Martin, who worked with this idiosyncratic musician for three albums, forged some judicious arrangements on Blow by Blow (Epic, 1975), but those sparse tracks are a far cry from the grandeur of "Nessun Dorma" here. A gorgeous opening, "Corpus Christi Carol" reminds what a unique approach Beck has to balladry: his playing retains an edge even at its most sonorous. And on "Elegy for Dunkirk," his guitar matches the majesty of Olivia Safe's wordless singing as much as the symphonic sound behind him.

Elsewhere, unfortunately, the Trevor Horn/Steve Lipson production team is utterly insensitive to its subject, thinking only in the most conventional terms. In contrast to its simple concert presentation, the arrangement of "Somewhere Over the Rainbow" fails to set the guitarist's playing in the proper relief. Beck's natural predilection for funk gets short shrift here as does his propensity to rock with animalistic abandon. "Hammerhead" finds him shredding at blistering pace, after a decoy of wah-wah effects, but the real disappointment of the production is to minimize the presence of Beck's band, the sole exception an appropriately tranquil "Serene," where precocious bassist Tal Wilkenfeld demonstrates her gently earthy touch.

Because Beck's playing on the four other vocal tracks so transcends the voices in depth of emotion and nuance, their inclusion suggests an act of sly perversity on the artist's part: it's almost as if the ex-Yardbird wanted to remind why, as a general rule, he prefers not to work with singers. Conspicuous by her absence is Imogen Heap who, in recent collaborations with Beck, has proven both a foil and a match for the latter's expressive tone. In contrast, Joss Stone offers a perfectly anonymous rendition of "I Put A Spell on You" and while on "Lilac Wine" Imelda May's singing is haunting, it does not compare with the ghostly air of the guitar. Likewise, Stone's mannered approach will not allow her to compete with the frenzy of "There's No Other Me," where Beck even threatens to collide with himself in his frenetic attack, but in the end, never loses his balance.

In its emphasis on orchestral textures, Emotion and Commotion certainly provides a clear stylistic contrast to the beat-driven studio projects that predate it, You Had It Coming (Epic, 2001) and Jeff (Epic, 2003). And while the album doesn't capture the full range of his extraordinary talents, that only suggests how difficult it is to capture the spontaneous combustion of his remarkable technique and unerring instincts.

Corpus Christi Carol; Hammerhead; Never Alone; Somewhere Over the Rainbow; I Put a Spell on You; Serene; Lilac Wine; Nessun Dorma; There's No Other Me; Elegy for Dunkirk.