By JEFF DAYTON-JOHNSON
April 11, 2010
Sign in to view read count 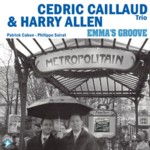 What if bassist Cedric Caillaud's sophomore effort had been recorded at Rudy van Gelder's fabled Englewood Cliffs studio and released on Blue Note Records in 1959, rather than France in 2009? The sound of Patrick Cabon's piano might have been slightly less warm (succumbing to engineer van Gelder's tendency to render pianos with a metallic tinge). Probably a bit of the players phrasing might have struck some listeners as vaguely futuristic—but not too much, really.

Overall, though, qualities appreciated fifty years ago are found here, as evidenced by the quartet's capacity to seize the blues vigorously—as on "The JAMFs Are Coming," Johnny Griffin's exhortation about the jive-ass mother figures (or something to that effect)—even as they round the edges off the hard bop just coming into fashion in 1959. The repertoire, too— lovely ballad treatments of "That's All" and "Blame It On My Youth," simmering mid-tempo version of "Do Nothing Till You Hear From Me," a frenzied "I Want To Be Happy"—would have delighted the Eisenhower-era boppers.

And that's OK. That is, Emma's Groove does not sound dated a half- century later. As Daniel Yvinec—who is, like Caillaud, French, and a jazz bassist, though the resemblance pretty much ends there—reminded an interviewer in 2009, early-'60s jazz embraced a vast stylistic range, from Ahmad Jamal to Ornette Coleman and many points in between. And so it is today, schools of jazz piled atop one another in a thoroughly post-modern, but healthy, fashion.

The saxophone being what it is, Harry Allen's is the most upfront voice here, his honeyed tone capable of a-setting and a-rocking in the manner of Ben Webster. But it's the rhythm section, the same as on Caillaud's earlier June 26 (Aphrodite, 2006), that makes the longest-lasting impression. Understated pianist Cabon, in particular, embodies the best features of the playing of Wynton Kelly and Red Garland, gritty yet elegant. He's the perfect foil for Caillaud's Ray Brown-inspired playing. And if all those references point back to 1959, well, no harm done, is there?

Our Delight; Emma's Groove; Dancing On The Ceiling; That's All; Do Nothin' Till You Hear From Me; Yours Is My Heart Alone; The Jamfs Are Coming; New Father's Bop; Robbin's Nest; I Want To Be Happy; Blame It On My Youth; What Can I Say Dear.