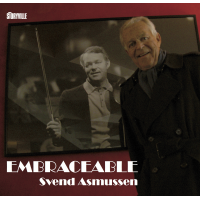 In 1987 when he was a young man of 70, Svend Asmussen played a gig in a small club in Paris. This year, on the eve of his 100th birthday, the Danish violinist rediscovered a tape made of the evening for a Parisian radio station. He says: "I assumed it would be just another radio show which I wouldn't care to hear again. But when it was transferred to CD, it was a revelation.

"It was a night with three excellent musicians who I had never played with before. It was quite a difficult gig for a 70-year-old: first set at 11pm, second at 12.30 and third at 2am. We didn't have a rehearsal. I had a few things scribbled down but I don't think anyone looked at them. They just played.

"The radio man casually mentioned, 'And by the way, the concert will be broadcast live so would you please announce the whole thing in French,' which I did."

Now, as the Asmussen centennial draws near, the rest of the world can finally listen in on the gig, shorn of most of the extraneous background noise and Asmussen's French introductions.

It's a rollicking, swinging affair, The Fiddling Viking kicking off with "Singin' In The Rain," which he first played as a 12-year-old long before the Gene Kelly musical popularized the tune.

The highspot of the evening is the Mercer Ellington number "Things Ain't What They Used To Be," which gives Georges Arvanitas a chance to strut his bluesy stuff on piano.

Then there's "Hushabye" by rock 'n' roll songsmith Doc Pomus and Frédéric Chopin's "Prelude in C-minor" to keep listeners on their toes amid such jazz staples as Toots Thielemans' "Waltz For Sonny" and George Gershwin's "Embraceable You."

Let's give Asmussen the final say: "Thirty years later, I find there is an unusually 'live' atmosphere in this recording. Honestly, I think it is the best music I've ever recorded."

Singin’ In The Rain; Sophisticated Lady; Hushabye; Trubbel; Prelude In C-Minor; Things Ain’t What They Used To Be; Waltz For Sonny; Just A Gigolo; There Will Never Be Another You; Embraceable You; Pent-up House; June Night.