By LARRY TAYLOR
September 1, 2011
Sign in to view read count 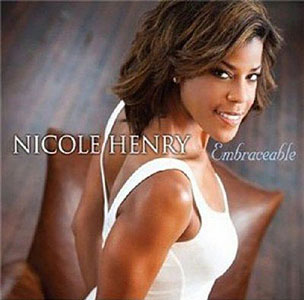 With the release of her fifth album, Embraceable, vocalist Nicole Henry pleasingly brings together a range of styles—smooth and mainstream jazz, along with pop and gospel.

A roster of musicians from diverse jazz backgrounds are featured on various tracks, with standouts including saxophonist Kirk Whalum, harmonicist Gregoire Maret and pianists John Stoddart and Britain's Oli Rockberger, who all contribute mightily. Among the albums's 12 selections, there are four new numbers including three Stoddart gems, and eight standards on which Henry puts her stamp.

Henry kicks off with a dreamy version of Mann/Weil's "Just A Little Lovin," with Maret's languorous harmonica creating the mood. The ambiance continues with Stoddart's soulful ballad, "Anything For You," which builds to a throbbing finish.

Whalum's lush tenor warms up a rocking version of Buddy Johnson's "Since I Fell for You." With Richard Jones' "Trouble In Mind," Henry gives tribute to Aretha Franklin, as Rockberger's solid blues piano brings home its soulful message. On Bob Marley's "Waiting in Vain," the singer subjugates its classic reggae beat, but Maret's harmonica more than compensates as it weaves in and out behind her plaintive voice.

Hitting her peak with Gershwin's "Embraceable you," Henry offers a romantic toast to this staple from The Great American Songbook. She brings it back to the church with her fervid preaching on Stoddart's "A Little Time Alone," as Whalum's wailing sax urges her on from the choir.

The album ends simply, with Christina Aguilera's "Save Me From Myself," Henry's unadorned voice caressing the lyrics, accompanied majestically by Stoddart. Henry's stated mission with this record is to take large steps in new directions, and she accomplishes this with a sweet, accessible voice that serves up lyrical ballads, as well as dishing out large helpings of soulful blues and gospel.

Just A Little Lovin'; Like Someone In Love; Anything For You; Since I Fell For You; Trouble In Mind; Hush Now; Waiting In Vain; Embraceable You; A Day In The Life Of A Fool; Even While You're Gone; A Little Time Alone; Save Me From Myself.