By BRUCE LINDSAY
October 8, 2010
Sign in to view read count 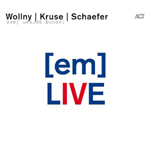 [em] live is the fourth album from [em], the German trio also known as Wollny/Kruse/Schaefer. The album was recorded at the 2010 JazzBaltica festival in Salzau—the complete concert except, as the sleeve notes declare somewhat sternly, "for listening pleasure the applause has been shortened." It's a combination of new compositions and four tunes taken from [em]'s previous albums—an inventive, often hard-edged and rock-inspired set from this extremely talented group.

Bassist Eva Kruse, who founded the band in 2002, has described its development as being like the seasons, with [em] live being its winter record. This might suggest a retreat inwards, or perhaps a coldness in the music, but neither is apparent. The tunes, most of them written by drummer Eric Schaefer, with three from Kruse and one from pianist Michael Wollny, have a fire in them, an energy that projects from the stage. There are definite hints of the Esbjorn Svensson Trio (e.s.t.), but the power in the band's performance also echoes hard-blowing groups such as UK's Acoustic Ladyland.

"Phlegma Phighter," originally recorded on [em] II (ACT Music, 2006), is extended here, expanding its breadth of moods as it encompasses Wollny's reflective, classically styled piano solo, as well as some pacey, powerful, ensemble playing. "In Water" bears a strong resemblance to the rock-influenced sound of Britain's Neil Cowley Trio in its positive, driving, drums and repetitive piano figures. "Etude No. 1" is funky—Kruse's bass line taking major responsibility for this, along with Schaefer's drum parts. "Arsène Somnambule," from [em] 3 (ACT Music, 2008) brings the band back towards a more thoughtful, darker approach. Kruse's solo, underpinned by Wollny's upper-register patterns, is sadly beautiful.

Kruse's "Sov Lilla Alma" is dedicated to her young daughter, with the bassist setting up a danceable groove with Schaefer, but the key sound is Wollny's reverberating, metallic, piano, which gives this lovely tune an air of mystery. Wollny's own contribution, "Kiyoshi"—another tune from [em] 3—is a much darker piece, as befits a tribute to this horror movie director.

"Gorilla Biscuits," from [em] II, is another rock-inspired tune; Schaefer's tribute to the rock band of the same name. Wollny plays big, rounded chords, as Schaefer's frenetic drums add pace. By this point, the initially respectful applause has grown wilder—cheers and whistles also appear—and as Kruse's "Break It" draws to a close, the crowd is fervent in its appreciation. This is only fitting: [em] live is a superbly produced live album from one of Europe's most exciting jazz ensembles.