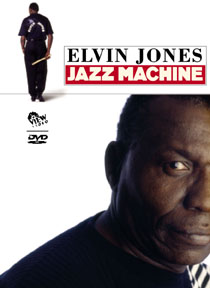 Elvin Jones may have established himself as one of the greatest drummers of all time, but equally important to him was his nurturing of young musicians. His Jazz Machine opened the door to several upcoming musicians, including Delfeayo Marsalis, Antoine Roney and Ravi Coltrane. He characteristically took delight in their playing, thus forging an emphatic bond. His attitude also served to enrich the music of the band.

The Elvin Jones Jazz Machine toured Europe in 1991 with Sonny Fortune (tenor saxophone, flute). Chip Jackson (bass), Willie Pickens (piano) and Coltrane (tenor and soprano saxophones). They recorded In Europe for Enja Records and were filmed at the Theaterhaus, in Stuttgart , Germany, for this DVD.

The quintet comes across strongly both as a band and in their individuality. The first tune "Is There a Jackson in the House?" makes a potent statement in its rhythm and melody with Pickens being the main focus. His journey makes judicious use of time and space, and Jackson adds enough ideas on the bass to give the whole an innate strength.

The luminosity of the ballad "Ray El" is lit by Fortune on the flute. He ministers to the melody before breaking into floating improvisations. Coltrane on the soprano saxophone pushes the compositions with fleet ideas, but it is Jones who shows how the tune can be cast in different patterns to make a comprehensive impact. At first his brushes are in soft consonance with Fortune and Coltrane, but when it's time for his solo, he gets more emphatic. From then on, he devises a series of rhythmic patterns, shaping his accents and driving the pulse to give the tune quite a different complexion.

"Bride of the Doll," based on a Japanese folk melody and written by Jones' wife Keiko, was a band favorite. Besides it's inclusion here, the song appears on the Enja CD and was performed years later at the Toronto jazz festival. Pickens plays the melody, injecting a fast tempo, hammering the keys while complementing the melody entirely with block chords. Coltrane and Fortune cut the groove deeper on the tenor saxophones, with Fortune blowing hard phrases that expand the composition. Jackson comes up with some wide-ranging ideas marked by motivic doublets, but Jones has the final say, his polyrhythmic explosions cascading, his timbral contrasts adding light and shade to the beat.

In short, the Elvin Jones Jazz Machine defines the art of modern jazz with an entertaining performance.

Tracks: Is There A Jackson in the House?; Ray El; Doll of the Bride.