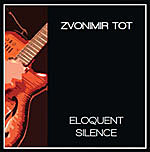 Eloquent Silence is an introspective yet powerful album by Chicago guitar virtuoso Zvonimir Tot. The album features an all-star band including bassist Larry Gray, drummer Ernie Adams, saxophonist Mark Colby and brass specialist Orbert Davis. All of the tunes were composed and arranged by the multi-faceted guitarist and reflect Tot's diverse educational and performing background. Bouncing between hard-driving funk tunes, laid back ballads, rock-inspired grooves and Latin beats, Tot's compositions spin a web of musical eloquence that is both engaging and intellectually provocative.

Each tune on the album reflects a different side of Tot's compositional palette. While Tot is firmly based in the modern jazz tradition, he also borrows heavily from other genres including funk ("Bruce's Dilemma"), rock ("Mira's Do-Re-Mis") and bossa-nova ("Sub Rossa"). Drawing from these and other genres prevents the album from sounding like a typical guitar trio/quartet venture. With each change in mood, Tot exposes a new and exciting corner of his compositional influences. Without this textural diversity the album would not have reach the high level of creativity and musical expression that it does.

Tot is at his best through every melody, solo and accompaniment section on the album. From his playing on the title track, which moves between ECM-type melodic lines and hard-bop inspired phrases to his hard-driving, distorted guitar solo on "Mira's Do-Re-Mis," Tot's virtuosic chops and strong sense of melody shine throughout. With such a high command of the instrument Tot could have easily relied on his chops to get him through any/all of the solos on the album. Instead, he carefully interjects his lightening-fast runs between melodic phrases, which serves to enhance these technically impressive moments while not becoming too repetitive or overbearing.

Bassist Larry Gray and drummer Ernie Adams, both regulars on the Chicago jazz scene, shine on every tune. Gray's bowed bass solo on "Mira's Do-Re-Mis" is one of the CD's peaks in terms of creativity and virtuosity. Gray's fingers fly across the strings with such ease and cleanliness that the bow and his left hand sound as if they are one and the same. Adams brings a well-defined sense of groove and feel to the rhythm section that pushes each soloist to new levels of creativity. Apart from laying down some serious grooves, Adams' solos during the trading portions of "Message Received" lay right in the pocket and showcase the drummer's ability to step forward and take control of a solo when the time is right. .

Eloquent Silence is an entertaining jaunt through the myriad of Tot's musical influences and favorite genres. Though it was originally released through the Chicago Session subscription service, due to the popularity of the series' releases including this one, all of the labels titles are now readily available.