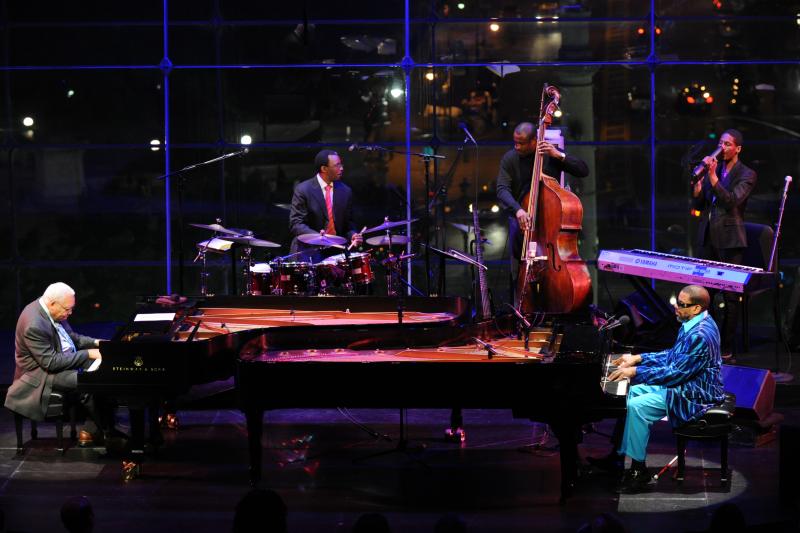 "A young lion, a seasoned veteran, and an elder statesman"—that's how drummer Herlin Riley introduced the three stellar pianists featured in Jazz at Lincoln Center's "New Orleans Piano Kings": Jon Batiste, Henry Butler, and Ellis Marsalis, respectively. Riley, who hails from New Orleans himself and could also be labeled a "seasoned veteran," served as MC, accompanist, and musical director for the concert. Bassist Reginald Veal, who has deep roots in the Crescent City as well, rounded out the musical personnel.

Jazz at Lincoln Center offered a festive, New Orleans atmosphere before the show, hosting a celebration in the lobby outside the doors of its Allen Room. The lively party was replete with a gumbo cook- off, cold beer, and live music by the Red Hook Ramblers, a Brooklyn-based band that plays traditional New Orleans-style jazz.

Jonathan Batiste, the "young lion," was the first pianist on stage. Following a playful, introductory musical treat "Riddle Rhythms," with Riley and Veal alone, Batiste sat at the piano and gave a tongue-in- cheek, detailed description of his plans for the blues he was about to play, "Bunk Man Shoes." He said he'd include an impressionist section that would bring Debussy to mind, a ballroom-like segment, and triplet rhythms á la Ray Charles. He paused, almost ready to play, and then, faintly but distinctly, we all heard the tinkling sound of the ringtone from a cell phone somewhere in the audience. He paused a moment more, and then began his performance by delicately repeating the ringtone on the piano, perfectly copying pitch and rhythm, incorporating it as the principal musical motif in the introduction to this blues and making it sound as if the riff itself was the height of musical artistry. Batiste's playing lived up to his description, and he added a good deal more as he displayed great technique and a wide range of nuanced colorings and textures, inventively evoking Jelly Roll Morton and other great New Orleans pianists both on "Bunk Man Shoes," and his following number, "Kindergarten," an original composition based in part on "Sweet Georgia Brown."

Ellis Marsalis was next on the program, and Riley introduced him appropriately as the "patriarch of New Orleans jazz." Batiste joined Marsalis on his first two selections, the pair of pianists facing each other on the matching Steinway concert grinds nested in closely together on stage against the Allen Room's breathtaking view of Manhattan. For Duke Ellington's "In My Solitude," the two played together unaccompanied; the drums and bass came back for "Love for Sale," with Riley adding in an Ahmad Jamal-like groove at one point. Marsalis then took the spotlight by himself, with beautiful ballad playing on "The Very Thought of You," steeped as much in the language of classic modern jazz as the musical traditions of New Orleans. He followed this with a strong bebop outing on "Magnolia Triangle," a composition in 5/4 by James Black, the legendary New Orleans drummer who collaborated with Marsalis in the 1960s, including work together on Nat Adderley, Jr. and Cannonball Adderley's In the Bag (Jazz land, 1962).

Henry Butler, the "seasoned veteran," was the last pianist up, adding a bit of flash to the evening with his dazzling blue zebra-striped jacket and bright azure-colored slacks. He joined Marsalis for a duet on "Old Folks," offering a meaty, gospel-tinged contrast to the elder pianist's playing, with quotes from "Willow Weep for Me" and "Honeysuckle Rose." Marsalis then left the stage, and Butler, blind by glaucoma since birth, joked that he had returned to music recently after working as a chauffeur and driving an 18-wheeler. He tore through two original compositions, "Orleans Inspiration," a signature tune for him, and "The Village," from his 1987 Impulse recording of the same name that featured Ron Carter, Jack DeJohnette, and Alvin Batiste. Both numbers showcased Butler's very percussive, blues-based style, with influences from classic R&B, New Orleans funk, and more than a little bit of Professor Longhair.

The show drew to a close with Marsalis and Butler on the two Steinways and Batiste playing melodica and electric keyboard, joined by Riley and Veal, first romping through John Coltrane's "Giant Steps" at a blistering tempo, the three headliners trading round after round of choruses. "Go to the Mardi Gras" was the rousing finish, with Butler singing the Professor Longhair anthem, Veal taking on the classic whistle chorus, and the entire ensemble laying down spirited performances that brought everyone in the audience to their feet for a standing ovation.