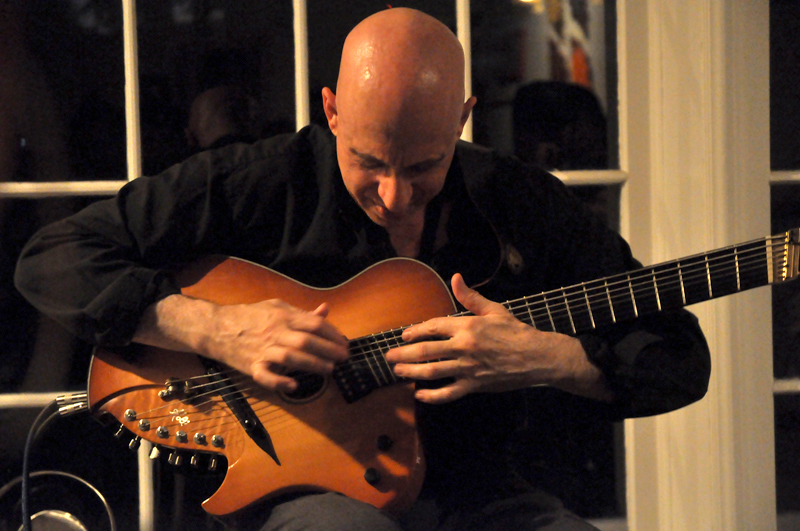 Sharp is a man with multiple projects, recordings and performances going at all times. He recently released an opera, Binibon (2011) on Wright's Henceforth Records, and he's at the helm of several longstanding ensembles like the blues projects Carbon, Terraplane, noise trio Bootstrappers, with bassist Melvin Gibbs and drummer Anton Fier, and numerous solo documents totaling over 85 recordings under his name.

The material for the concert's two 45-minute sets was drawn mainly from a series of etudes that Sharp composed for his new, custom made eight-string guitar—two bass strings, plus the traditional six. He recast those etudes into cells that explored different ideas then blended them together with improvised segues.

Sharp's astonishing technique of two-handed tapping, which he has been perfecting for almost 40 years, is key to his improvising dynamic. The musician is also fond of electronics, and he brought seven pedals to the gig, often using several at once.

The first set began with the guitarist tapping with his left hand on the 12th and 14th frets, while his right hammered in various spots between the end of the fingerboard and bridge. He gradually added delay into the mix, which produced a kind of trance-like staccato. Sometimes the taps produced ringing bell harmonics, other times muted overtones. The distance between hands seemed to govern a slowly developing sense of melodic generation.

There were moments when the manic striking of alternating notes took on the character of a synthesizer sequencer—that's how precise, (and relentless) his technique was. Sharp began sampling some of his motifs, then changing the speed of the loops, until at one point, he was playing more with his feet on the pedals than he was with his hands.

Once he built a suitably chaotic wall of electronic mayhem, he set the guitar aside and picked up a curved soprano saxophone and began a series of disjointed fragments offset by quiet multiphonics. There was a clip-on microphone attached to the soprano, allowing him to loop various phrases and incorporate them into the already dizzying electronics.

Throughout both sets, Sharp picked up assorted items stored on a small table to manipulate the timbre of his guitar. He took two tightly wound springs about 6 inches in length and scraped one across his strings vertically while using the other as a crude slide along the strings. He also played with two slides at once—getting sounds like whale songs from his instrument.

After a brief intermission, Sharp again recorded a short sequence of tapping, this time eliciting percussive sounds from beyond the fingerboard, creating a staggered, off-kilter drum loop. He then took two EBows into his right hand for searing ghostly repetitions.

Occasionally the guitarist stepped on a harmonizer pedal for some strange overtones; Eventually, though, he began backing off the pedals to explore more of his two-handed tapping. He took a rhythmic phrase and transposed it all over his instrument, then slipped back into the machine like sequencing. To wind up the second set, Sharp included some slightly overdriven sustained licks, à la Carlos Santana, and some truly atonal blues phrases played in an (almost) conventional fashion.

After the concert was over the guitarist generously spent time with anyone who had questions, and even let a few lucky patrons test drive his beautiful instrument.

Kudos to Bonnie Wright for the vision to invite such a wonderfully out-of-the-box performer. Sharp is doing some very creative stuff, indeed.