By DAN MCCLENAGHAN
July 1, 2005
Sign in to view read count 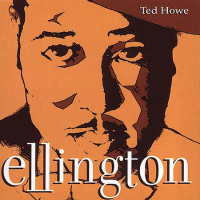 Pianist Ted Howe missed the centennial of Duke Ellington's birth by six years with this release. In late '98 and '99 there were more tributes to the Duke spinning around out there than you could count. I don't recall anybody honoring Ellington via the piano trio route, though, and Duke himself rarely recorded in the format—Money Jungle (Blue Note, 1962), with bassist Charles Mingus and drummer Max Roach, stands out as an exception.

On Ellington, the pianist and his trio give ten of Duke's most beloved compositions the piano trio treatment, delving deep into the Ellington songbook with an informed gusto. Their respect for the music is obvious, with Howe and Company employing an array of styles from deep blues to sensual Latin and a gorgeously, dreamily classical take on "A Sentimental Mood." "In My Solitude" has a gentle, lilting Brazilian feeling, featuring drummer Jerry Fields on cajon, and "Mood Indigo" features bassist Neal Starkey taking the lead on melody.

Howe has developed his Ellington catalog over the years, and he began this recording as a set for use by the Ruth Mitchell Dance Theatre, as music for the purpose of choreographing his "Ellington Show." Then this CD happened along the way. Sometimes when an artist isn't sitting down with the expressed desire to create timeless art, timeless art happens anyway. It did here, in an extraordinarily fine tribute that gets to the core truths of the songs while giving those truths new perspectives—Ellington done with a deft mix of reverence and innovation.

Things Ain't What They Used To Be; Caravan; Do Nothing Till You Hear From Me; Prelude to a Kiss; Sophisticated Lady; In A Sentimental Mood; It Don't Mean a Thing if It Ain't Got That Swing; In My Solitude; Mood Indigo; Take the 'A' Train.