By JOHN KELMAN
November 3, 2004
Sign in to view read count 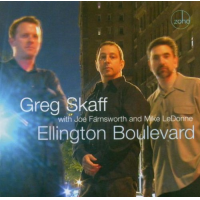 Recording studios can be cold and uninviting places. Without the ambience of a live room and an eager audience, some artists are challenged to capture the fire and the energy that results from the feedback of a receptive group of listeners. As wonderful as many studio recordings are, they don't always succeed in portraying what the group is really about. Watching Hudson Music's video of The Peter Erskine Trio Live at Jazz Baltica versus any of the trio's ECM recordings show, for example, a very different group.

The sterility of the studio doesn't appear to be problematic for guitarist Greg Skaff. Add the clink of glass, the occasional cough and the scrape of chair against floor and Ellington Boulevard is so hot, so full of life that it could easily have been recorded in a club. It combines the energy of a live recording with the greater control over sound that is possible in the recording studio—the best, then, of both possible worlds.

Ellington Boulevard , released last year as Blues for Mr. T and now reissued by ZOHO Records, pays tribute to the late Stanley Turrentine, a one-time employer of Skaff and inspiration for this set of high octane bop, soul grooves and blues. Teamed with organist Mike Le Donne and drummer Joe Farnsworth, Skaff creates a set that moves from the more complex post bop of "Baku" to the comfortable swing of "Rambler" and the light shuffle of the title track.

As a guitarist, Skaff's precedence lies in Wes Montgomery and Grant Green, but by way of George Benson and Pat Martino. With a tone that is less thick, less dark than Martino's he still tends to favour rapid sixteenth-note runs and the occasional repeated phrase for emphasis. But unlike Martino Skaff settles more gently into a ballad, as he does in his bluesy reading of Freddie Hubbard's "Delphia." Still, like Martino he also favours tempo shifts within a tune, as he does on the Hubbard piece.

Le Donne is equally capable of navigating the sometimes circuitous charts that Skaff chooses. He swings the bottom end hard on McCoy Tyner's "Inception," yet is equally capable of greasy funk on Skaff's own "Poundcake." And Farnsworth, heard recently on Eric Alexander's Dead Center , proves that the best drummers have the breadth of vision to cover everything from the tender Ellington/Strayhorn ballad "Isfahan" to Skaff's soul jazz closer, "Highway 54."

But what makes this a most satisfying date is how completely committed the trio is. The ring of truth is loud and clear on this recording; there's not a wasted phrase, nor a note that doesn't feel like the right and only choice. Ellington Boulevard is another fine record from Skaff, who, along with Vic Juris, Dave Stryker and Richie Hart, is leading the vanguard of contemporary post bop guitarists on the New York scene.

Visit Greg Skaff on the web.