By ANDREW VELEZ
August 2, 2009
Sign in to view read count 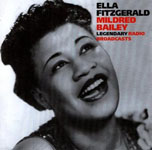 Two vocalists supreme, Ella Fitzgerald and Mildred Bailey, can be heard in some rare sides on Legendary Radio Broadcasts. The former's broadcasts are from January 1940, only months after she had taken over leadership of her mentor Chick Webb's band. The intro is from her early signature novelty hit, "A Tisket A Tasket," and she is introduced in time capsule style as "Ella Fitzgerald and her famous orchestra, broadcasting from the home of happy feet, the Savoy Ballroom up here in Harlem."

The set is peppered with several vintage big band pieces ("Traffic Jam" and "Diga Diga Do") and a brass section that really heats up "Limehouse Blues." Still, it's Fitzgerald's show and her vocal on "Tain't What You Do" includes one of her early attempts at scatting. What was eventually to evolve into a remarkably complex vocal style was at this point clearly just tied to simple swing rhythms. Typical of the pop novelty material she sang before her now-classic songbooks is "Oh, Johnny, Oh." She's sweet, she's dear and already smooth to the max.

On Bailey's 1945 sessions it's Paul Baron and his orchestra, featuring Teddy Wilson, Specs Powell and Red Norvo with guests Charlie Shavers and Tommy Dorsey. As jazzmen they are clearly totally comfortable with "The Rockin' Chair Lady." Though hers was a small voice and her sound girlish, Bailey's musicianship was fully mature at this point. A full-fledged star and jazz bird to her fingertips during the 1930s, she could be flirtatious with an irrepressible optimism or, as with "It Had To Be You," swing hard with a bluesy edge.

Bailey's straightforward take on Ellington/Russell's "I Didn't Know About You" and the web she spins with her shimmering vibrato on "I'm Gonna See My Baby" are indisputably the work of a supreme vocalist. That she is often spoken of as being as innovative and influential as Billie Holiday is no mere hyperbole. Bailey's available catalogue is modest, which makes this release all the more welcome. Current singers may wish they could sound this au courant now, much less 65 years on.

Ella Fitzgerald: A Tisket, A Tasket; Traffic Jam; A Lover Is Blue; Dodgin' the Blues; 'Taint What You Do; Confessin'; Blue Lou; What's The Matter With Me?; I Want the Waiter; Let's Get Together; A-Tisket, A Tasket; Limehouse Blues; This Changing World; Oh; Johnny; Oh!; Diga Diga Do; Thank Your Stars; Take It From the Top; Vagabond Dreams; Break 'Em Down; Let's Get Together. Mildred Bailey: Hold On; It Had To Be You; Summertime; Sleighride in July; The Sheik of Araby; Swing Low; Sweet Chariot; Enchantment; I'm Getting Sentimental Over You; Smoke Gets In Your Eyes; Which of the Great 48; Hold On; Hold On; I'm Beginning To See the Light; Trummin' On A Riff; I Didn't Know About You; Bugle Call Rag; He's Funny That Way; Night Music; Rosetta; St. Louis Blues; I'm Gonna See My Baby; Hold On; Sometimes I Feel Like A Motherless Child; At Home With A Gnome; Stompin' At the Savoy; Evalina; Hold On.