Ella Fitzgerald: Just One Of Those Things 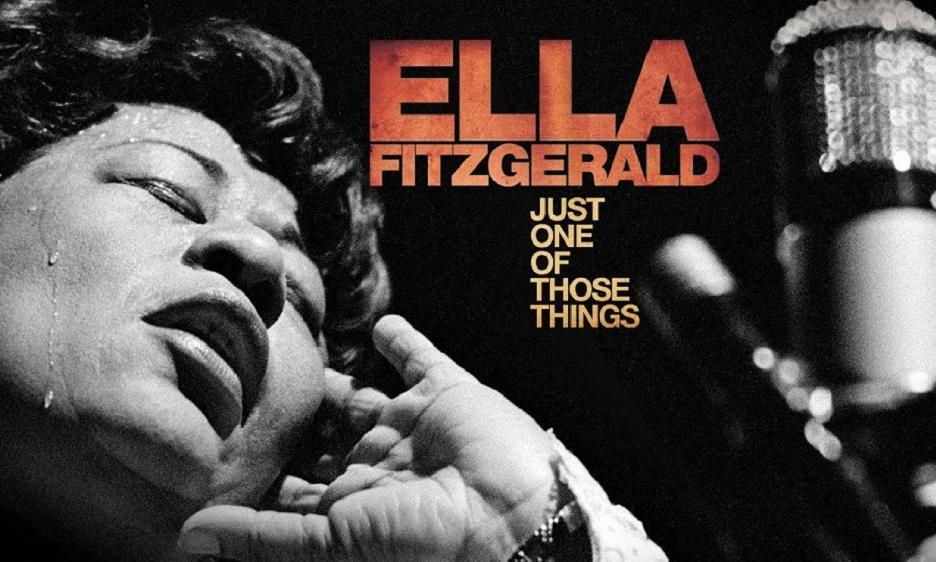 By IAN PATTERSON
June 5, 2019
Sign in to view read count
Just One Of Those Things
Ella Fitzgerald
Eagle Rock
90 minutes
2019

In the public mind, Ella Fitzgerald was unarguably one of the great jazz figures of the twentieth century. She mightn't be fetishized the way Billie Holiday, Miles Davis, John Coltrane or Chet Baker have been—there wasn't quite enough tragedy in the singer's life for that kind of attention—yet perhaps more than any other jazz musician, Fitzgerald is globally synonymous with The Great American Song Book.

The ninety-minute film-documentary Just One Of Those Things (Eagle Rock, 2019) charts Fitzgerald's life in fairly linear fashion, from her birth in 1917 to her death in 1996, duly marking the major steps in Fitzgerald's rise from obscurity to world-wide fame. It's an extraordinary tale, simply though elegantly steered by director Leslie Woodhead, the veteran British documentary maker.

A life-long jazz fan, Woodhead previously turned his lens on jazz photographer Herman Leonard, in the post-Katrina documentary Saving Jazz (BBC, 2011). He also collaborated with Leonard on his final book of pictures, Jazz (Atlantic Books, 2010) and made a film on Tony Bennett. Leonard's iconic photos of Fitzgerald grace Woodhead's film, while Bennett is one of a cast of luminaries who share their appreciation of Fitzgerald.

By far the best of these cameos is by former dancer Norma Miller—ninety-eight at time of filming—who reminisces about Fitzgerald's debut live performance, in Harlem in 1934, as a sixteen-year-old hopeful on the Apollo Theater's Amateur Night. Fitzgerald's shabby dress and shyness provoked laughter but that initial disdain disappeared when Fitzgerald began to sing. "She shut us up so quick you could hear a rat piss on cotton," the effervescent Miller recalls.

That Fitzgerald lost her mother at age thirteen, was sent to a dehumanizing reform school—from which she ran away—and spent time homeless on New York's streets, puts into perspective just how life-changing her success at the Apollo Theater's Amateur Night would prove. The adversity that Fitzgerald repeatedly overcame runs through Woodard's film like a leitmotif, as does the impression that Fitzgerald, for all the love showered on her by her audiences, was essentially a lonely individual.

Anyone seeking revelations or salacious detail from this film may be disappointed, for unlike some other jazz legends, Fitzgerald never succumbed to drink or drugs, led a seemingly solitary life following her divorce from Ray Brown in 1953, and was neither outspoken nor militant during the civil rights movement.

Perhaps the only record of Fitzgerald condemning the USA's endemic racism came during a 1963 radio interview with Fred Robins, when she spoke of her "embarrassment" when faced with questions from journalists abroad about the racial apartheid in her country. She describes the prejudice as "pitiful," but the programme, we learn, was never broadcast.

Race, inevitably, is another of the film's chief protagonists, and was an ever-present issue in Fitzgerald's lifetime. From her family's move from Virginia to New York in 1919 ---part of the decades-long Great Migration, when millions of Afro-Americans left the rural South for the cities of the Northeast and Midwest—to the refusal of numerous club owners/promoters to engage black artists, the measure of Fitzgerald's success can be seen against this racial climate. "Everything was race, " recalls dancer Norma Miller. "You couldn't go to Woolworth across the street."

Even at the height of her success, with record-sales in the millions, and playing to adoring audiences around the world, Fitzgerald's house in Beverly Hills had to bought in jazz impresario Norman Granz' name. A central figure in Fitzgerald's life, Granz is rightly accorded significant space in Woodhead's film. If it was Fitzgerald's own courage and self-belief that launched her career at the Apollo Theater as a teenager, that catapulted her to national renown in Chick Webb's Orchestra, and that established her as a scat improviser on a par with the great bebop instrumentalists Dizzy Gillespie and Charlie Parker, then it was Granz' vision and astute management that guided Fitzgerald to her greatest commercial success.

There's some footage of Fitzgerald on stage with Jazz at the Philharmonic -the mammoth tours organized by Granz that featured a roster of jazz A-listers. JATP, the narrator relates, was seen by some purists as a little more than a circus, although the musicians were hailed as stars, paid well, and importantly for Granz, accorded respect as human beings. Perhaps the naturally shy Fitzgerald didn't feel the need to use her platform to speak out on racism when her manager, Granz, was heroically fighting the Afro-American musicians' corner for integrated venues and racial equality.

Granz also founded Verve Records, on which Fitzgerald would famously record a series of eight songbook albums. Fitzgerald, initially, had her doubts: "At first I thought, my gosh, what is Norman doing? He's taking me away from my jazz and who wants to listen to me singing this? But it was funny, I just gained so many fans all over the world. So, it was like a new beginning."

The songbook records sold in huge numbers and helped cement the songs of Harold Arlen, Cole Porter, George and Ira Gershwin etc, in the jazz cannon. Absent from the film's narrative, however, are any voices of dissent, notably of certain jazz critics such as Nat Hentoff, who felt that Fitzgerald's talent was wasted on such popular material.

Another figure who championed Fitzgerald was actress Marilyn Monroe, who helped the singer get a gig in the normally whites-only Mocambo in Hollywood, by telling the owner she would take a front-row table every night that Fitzgerald played there. Monroe was as good as her word and it's interesting to hear Fitzgerald acknowledge that she owed Monroe a great debt for helping to lift her out of jazz clubs and reach a wider audience.

The film boasts some never-before-seen-footage, though live footage in general is both short in duration and mostly familiar. There's Fitzgerald at Ronnie Scott's, Fitzgerald with the JATP, and Fitzgerald at the Montreux Jazz Festival, receiving flowers from Claude Nobs. Less is probably more, and on the whole Woodhead achieves just the right balance between portraying Fitzgerald's career, the environment in which she existed, and the unfolding history of half of the twentieth century.

Also included in the film is a famous audio snatch of the singer scatting in Berlin's Deutshclandhalle in 1960, when Fitzgerald's breathless five-minute improvisation during "How High the Moon" drew upon show-tunes, nursery rhymes, symphonies, jigs and folk tunes—over forty tunes in all, author/music critic Will Friedwald informs us. In a way, this clip offers the most complete portrait of Fitzgerald, underlining her technical brilliance, the music that informed her, and the popular roots of jazz.

The final scene returns the viewer to Harlem's Apollo Theater, where sixteen-year-old Alexis Morrast sings "A-Tisket A-Tasket" to the empty stalls. It's a poignant reminder of how far Fitzgerald came, and where she came from.